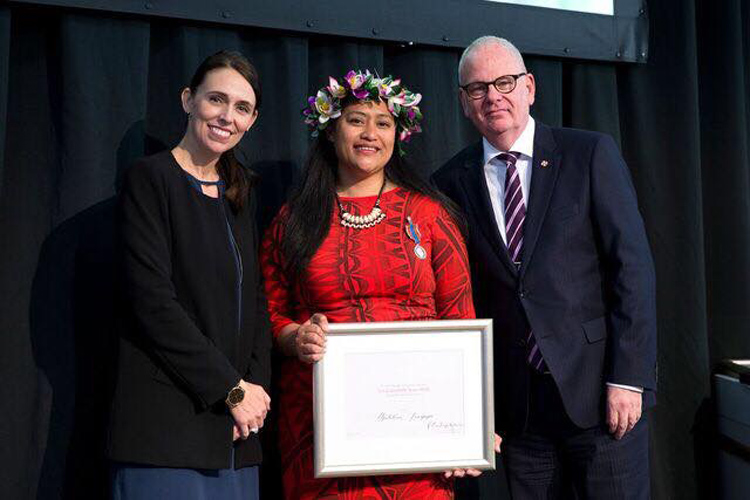 For the next blog post in the Pacific Women Leaders series, I met with Matalena Leaupepe.

Matalena Leaupepe is passionate about creating opportunities for Pacific people, and she’s been awfully successful at it.

Matalena is one of only five recipients of the 2018 inaugural Te Tohu Tūmatanui o Aotearoa New Zealand Public Service Medal, awarded to public servants who have given meritorious service. A former chief advisor, Pasifika, at the Ministry of Business, Innovation and Employment, Matalena was the driving force behind the successful Tupu Tai internship programme aimed at increasing the flow of Pacific people into public sector policy. Having worked in the public sector for more than 10 years, Matalena recently changed roles and is now the Director for the Government Centre for Dispute Resolution.

“One of the key drivers for me while in my former role was to look at ways to help improve and increase Pacific people’s participation in high-skilled, high-paying jobs,” Matalena explains during an interview in her office.

She says the average Pacific wage is $19,700 per year, which is $8,800 less than the national average and she’d like to see it much higher.

“I want to see more Pasifika people in jobs that will be around for a while and out of jobs that are likely to be replaced by automation, such as manufacturing, banking customer service, and data entry.”

“It’s important that workers are able to develop transferrable skills and not replaced by technology. They have to be ready to move into other jobs,” she insists. “One of the issues that I’ve seen is the lack of opportunities available to people in front-line and operational roles to get career development opportunities. I’ve seen people with qualifications staying in entry-level jobs because of a lack of self-confidence and encouragement to try out different opportunities.  Due to limited networks some are working at jobs their parents worked in.”

The mother of three was born in Samoa and comes from the villages of Fasitoo uta, Safotu, Sili & Satupaitea. She came to New Zealand with her parents when she was only 10 years old.   She says the reason the whole family packed up and moved was because her older brother had gotten into St. Patrick’s College. Her parents also wanted to seek a better future for the rest of the family in Aotearoa.  Her mother, Fiu Leaupepe is a retired nurse and volunteers with the Victim Support group in Samoa, offering counselling and therapy to victims. Matalena says her mother likes to help others.

“When the tsunami happened in Samoa in November 2009 she took six weeks off to go and help. In crisis she gets things done,” Matalena notes. “Three years ago, my mum retired from her nursing job in New Zealand where she worked for over 20 years and moved back home to retire.”

Matalena’s career is varied.  She worked in the NGO-sector before joining the public sector. She served for seven years as a tutor for Pacific Studies 101 at Victoria University under the guidance of Dr Teresia Teaiwa. Her public sector career began as a Policy Advisor for the Ministry of Pacific Peoples, then Careers NZ. She went on to work for the Department of Labour.

“There are so many barriers to participation. We do not have many Pacific people in policy roles or senior leadership roles across the public sector,” she says. “This impacts our ability to influence how policies are designed and ultimately, their effectiveness on Pacific people. This is the same for Maori and other minority groups.”

In the next ten years, Matalena says she hopes to have a bigger influence on how the public sector works with Pasifika people and other minority groups.  She knows change is needed in the system to ensure that everyone is given opportunities to reach their full potential and a chance to make a positive contribution to society.