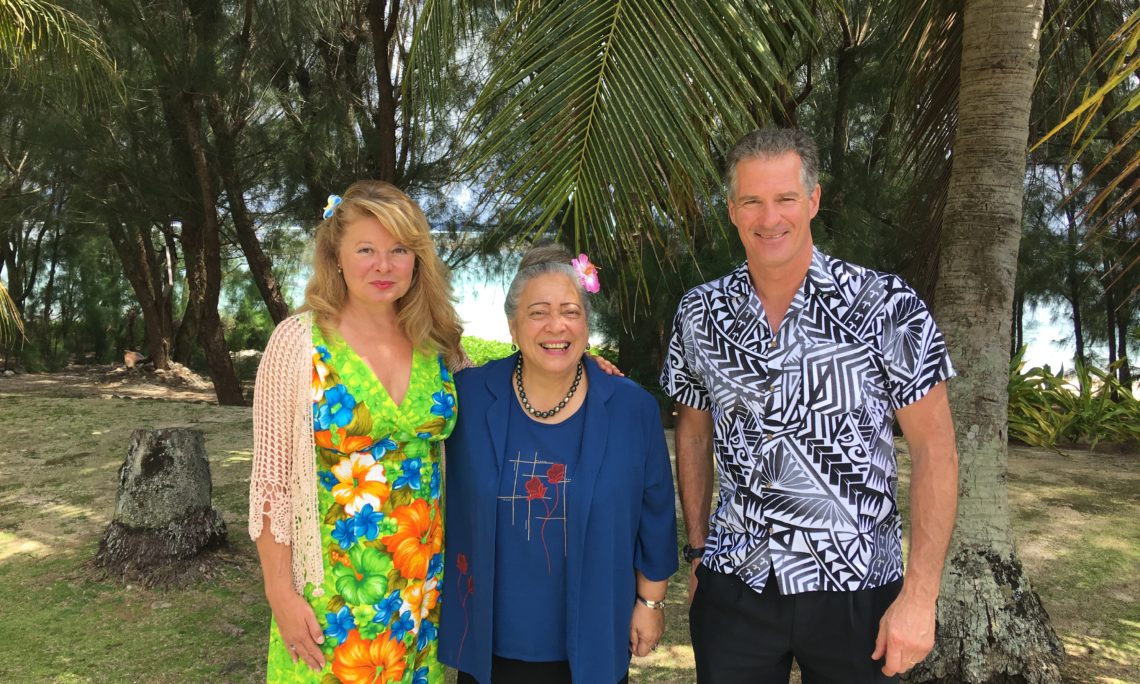 For the next blog post in the Pacific Women Leaders series, I met with Niki Rattle – Speaker of the Cook Islands Parliament.

“It’s the sweetest coconut juice in the world,” says the Speaker of Cook Islands Parliament, Niki Rattle as I sit down to interview her on a hot  November day in Rarotonga. The coconuts have just been chopped off the tree right outside of her office and at first I’m a bit shy about drinking the juice straight out of the shell.   She assures me the raw juice is good for me.   And I take a sip, not daring to refuse the Madame Speaker’s command.

This is her quiet time.  Within the hour, she will welcome MPs on day one of the final parliamentary sitting for the year.  With 24 members, the room will be full of mostly men.  After all, there are only four women serving in the Cook Islands Parliament.  She wants to change that.

Sitting in the big Speaker’s chair is a long way from her home island Manihiki hospital where she spent three years as a registered nurse, helping deliver babies under challenging situations. She had been away from Manihiki for 30 years and returned in 1993 after becoming a NZRN. “I’ve had an amazing life as a nurse.  I once delivered a baby under a breadfruit tree using a kerosene lamp and the moonlight due to a power cut in Manihiki [a remote island in the northern group of the Cook Islands],” she says when asked whether she’d ever encountered scary moments in the delivery room.

Using her experiences as a health professional, Speaker Rattle also went to work as a Secretary General for the Red Cross on Cook Islands.  “We worked well with the American Red Cross and we were fortunate to host a staff here while he carried out an Assessment of our Organizational Development.  In fact, my Red Cross work is how I got this job here,” she explained.   It’s a strange way to get such a powerful job, but the offer came out of the blue five years ago when she was appointed as the Chairperson of the 2011 International Conference of the Red Cross and Red Crescent in Switzerland in 2011 where the Cook Islands Prime Minister Henry Puna was present at the invitation of the Swiss Government.

It was wintertime in 2012 and the Parliament’s current Speaker had fallen ill.  It was then that she received an invite from Prime Minister Henry Puna, who said, “I have something to offer you and you can’t say no.  I want you to be Speaker.”

“I was shocked,” Speaker Rattle remembers.  “I had no political experience.”

Her appointment was a gamble for the Prime Minister who was criticised by the opposition.  Some people felt an elected MP should fill the position.

But Prime Minister Puna didn’t back down.  He thought Rattle was perfect for the job with her empathy, dedication to public service, and ability to mediate sensitive issues.

Speaker Rattle said, “He asked me what the Red Cross believes in.  I told him, ‘We believe in humanity, neutrality, and independence,’ and he said that’s what we need here.”

Five years later, she’s still presiding over the Cook Islands Parliament, and now the Madame Speaker is eager to see more women follow in her footsteps.

“Our population is half women and half men.  For that reason, women should have equal decision-making power,” Speaker Rattle insists.  Towards that goal, she’s worked with the National Council of Youth to encourage young women to pursue careers in politics and public service as well as through the National Council of Women.  She’s trying hard to promote women in government yet she understands it’s difficult for many women to raise a family while earning their stripes in the bruising political arena.  She wants women to feel empowered to be leaders in their communities.

As a child in her native Island of Manihiki, Niki Rattle never dreamed she’d be sitting in Parliament one day.  But after her first husband died of a brain tumour, remarried with a teenage daughter, she went on to raise two more children, work as a nurse, and serve as Secretary General of Cook Islands Red Cross for 19 years.  So, when the opportunity arose to give back to her people in a new role, she couldn’t help but say “yes” to the Speaker position with a heart of gratitude and a huge appreciation for serving the people in a different arena of responsibilities.  She tells me she’s glad that she did take the job, even though she was unsure in the beginning.

Passionate about her people and her island community, Speaker Rattle brings deliberation and a sense of calmness to the job.  She demands respect in Parliamentary proceedings, and she receives it.  Now she’s trying to encourage other Cook Islands women to join her and the other four women in Parliament.