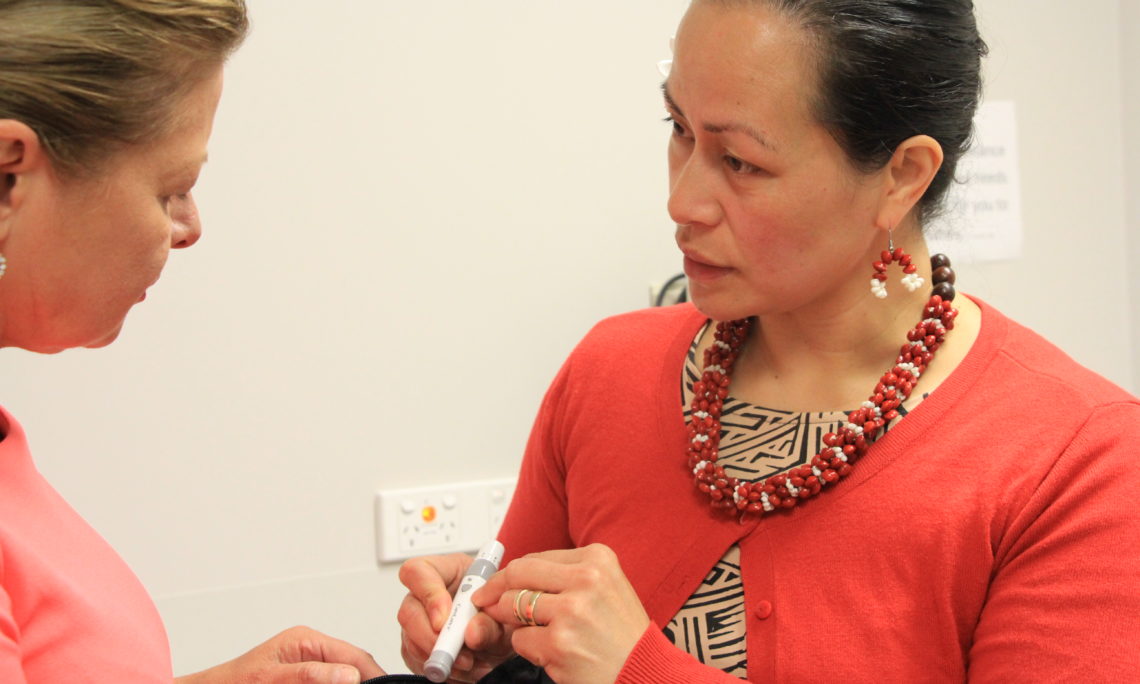 For the next blog in the Pacific Women Leaders series, I met with Sera Tapu-Ta’ala, a Clinical Nurse Specialist at Kenepuru Hospital in Porirua.

No one understands the serious health problem that diabetes inflicts on Pacific people better than Sera Tapu Ta’ala.  As a Clinical Nurse Specialist at Kenepuru Hospital in Porirua, she has spent 16 years specializing in the education and management of treatments of diabetes – one of the biggest health issues facing Pacific people.  Of Samoan descent, Sera says her passion is to help fight this growing problem.

Most people suffer from type 2 diabetes which is characterized by high blood sugar. The body either doesn’t produce enough insulin, or it resists insulin.  The chronic condition affects the way the body processes blood sugar (glucose). While type 2 diabetes primarily occurs as a result of obesity and lack of exercise, it can be managed through lifestyle changes.

Type 1 diabetes is an autoimmune chronic condition in which the pancreas produces little or no insulin. It is lifelong whilst also being very expensive to treat. Long-term complications from high blood sugar include heart disease, stroke and diabetic retinopathy which can result in blindness, kidney failure, and poor blood flow in the limbs, possibly leading to amputations.

Unfortunately, many people who may already have early onset of (Type 2) diabetes are not aware they have it. Many people who have early onset diabetes, don’t even know it.  Sera, who lives in Porirua, educates the public and other health professionals, as well as the local communities and churches. She says she encounters many people who don’t even know they have diabetes. “For Pacific people, the church is where they congregate. It makes sense to me that the churches can support the needs of patients outside the clinical world,” she explains while talking about necessary lifestyle and diet changes that must accompany long-term treatment. Sera, who is the mother of four, says many Pacific people have a hereditary predisposition to Type 2 diabetes, as it runs in families.  A lack of physical activity and sedentary lifestyle contribute a large part in the development of diabetes affecting commonly overweight individuals.

“Food has a social value in our culture.  However, we need to educate our people to be aware of how much food they’re eating…staying active and paying attention to the amounts of food consumed in any one time are pivotal to maintaining a healthy weight”, she explains.

“It’s now a growing problem among younger people, including teenagers.  Some of the youngest people with type 2 diabetes can be as young as 15 years of age,” she says.

Childhood obesity feeds into the growing problem of diabetes, with low-income families having higher rates of obesity.

Though Sera spends a great deal of time educating and teaching on diabetes treatment management and prevention, she’s also currently studying at Victoria University to get her Master of Management and Business Administration (MBA).  She’s interested in developing more business and entrepreneurial opportunities, explaining, “Hopefully I can influence change from the top down with a frontline voice.”