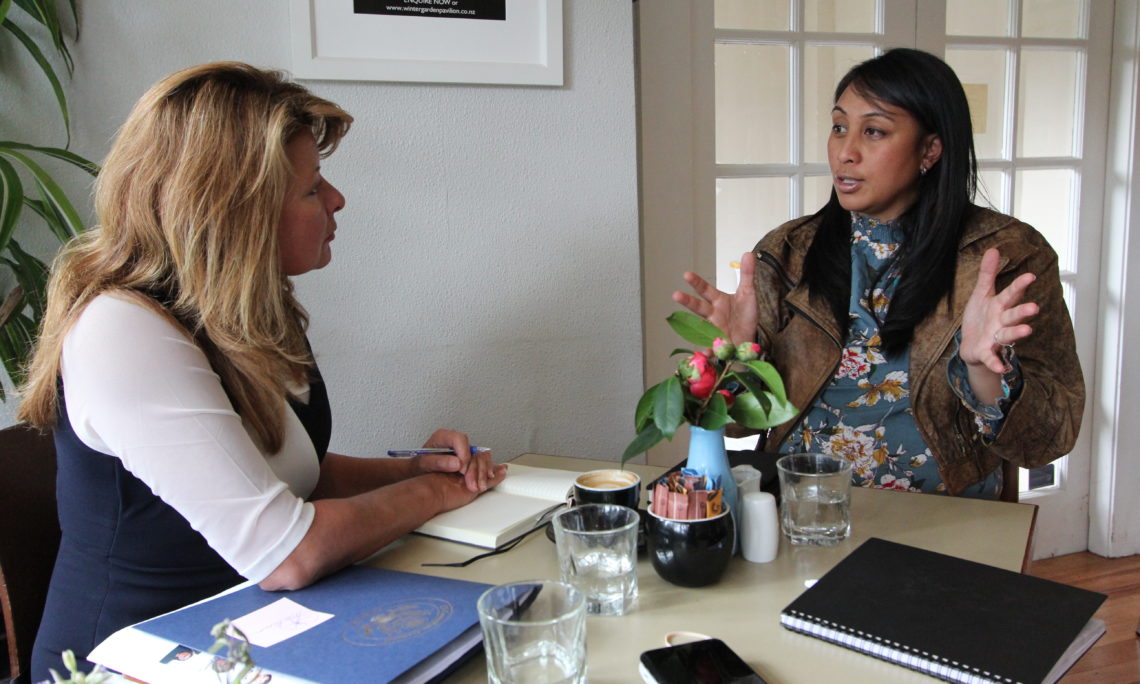 For the next blog post in the Pacific Women Leaders series, I met with Vania Wolfgramm.

Vania is a former rugby player for the famous Black Ferns.  She loves the sport. Now, as the Women’s Rugby Development Manager at New Zealand Rugby (NZR), her job is to share her passion for rugby with other young women and encourage them to try it.

The mother of a young toddler, with a second baby on the way, Vania has been in the management position since 2012. Among the programs she’s successfully developed what is known as the Pasifika Aotearoa Cup (PAC), credited with bringing more women into the sport.

The Pasifika Aotearoa Cup is a collection of tournaments for fifteens and sevens.  It was first played in 2013, bringing together some of the best women’s players in the country.  With festive song and dance, it is a cultural event with Cook Islands, Samoa, Tonga and Maori all represented.

Vania’s rugby program has gone from having only six teams to currently fielding more than 40 teams!  But the former Black Fern tells me it’s still very difficult to get female coaches.

“It’s quite difficult to find women who will be coaches.  We are always on the hunt for more.”

Women’s rugby hasn’t been around that long.  The first sanctioned Women’s World Cup was in 1998.  The Black Ferns proudly hold the Cup now, and it’s only been in recent years that women’s rugby became an Olympic sport as well.

When Vania started working for NZR six years ago, she was the sole employee dedicated to women’s rugby.  Now this has increased to seven employees working in community and development. The number of females getting involved in playing rugby is skyrocketing and Vania credits this to the inclusion of women’s sevens in the Olympic games.  She also says social media and television influence much of the sport’s growing popularity.

“The influence of women playing rugby and being seen on TV is one of the reasons we have had such growth in the women’s space.  There is a huge appetite for girl’s rugby. In the younger age brackets, we are identifying that girls are becoming more confident in playing in all-girls teams and competitions as opposed to having to play mixed grades with the boys,” she insists.

Vania’s goal is to help eliminate the barriers of cost and travel so that more young girls can try the sport. For that reason there is no cost to play in the PAC tournaments.

Vania says the greatest benefit of the sport is teaching athletes responsibility.

“We teach these girls to set the bar high in life by demonstrating a strong work ethic, cleanliness, and teamwork,” says Vania.

As she encourages more girls to play rugby, she’s also pushing for equality in sports.   Only this year, the Black Ferns professional rugby players started getting paid. When Vania started playing for the team professionally in 2002, women weren’t paid a dime for their hard work and commitment.  Then she only dreamed of the day women would get paid just like professional male rugby players. Women get paid far less, but with strong and determined women like Vania pushing the charge, equal pay in rugby is no longer a fantasy.

Vania’s husband, Stephen, is from Tonga and works for the Ministry of Corrections.  They have a little 2-year-old named Sterling.