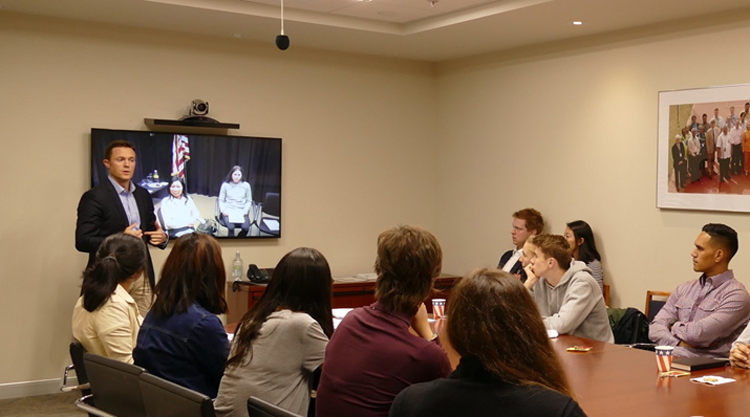 On May 27, 2016, the U.S. Embassy Wellington and U.S. Consulate General, Auckland were joined by twenty exceptional New Zealand students planning to attend University in the States as of Fall 2016. Many of the students will be attending some of the best institutions the Unites States has to offer including Harvard University, Stanford University, New York University, The University of California, Berkeley, and Cornell University. In order to assist students with preparation, the Embassy and Consulate, in coordination with Education USA, organized a Pre- Departure Orientation. The orientation equipped students with information essential to their individual travel plans and allowed them to ask important questions pertaining to the American way of life and study in the States.

Upon arrival, students were welcomed by Katie Sleeman, the Auckland based education advisor. Diplomat Kennon Kincaid congratulated the students on their academic achievements, encouraged that they continue to participate in a cultural exchange between New Zealand and the United States, and wished them success throughout their time in America.

To ensure that there was a clear understanding of student visa requirements, a representative from the Consular Section, Auckland gave a brief overview on procedures and answered visa questions. The students were grateful to have received guidance and for the opportunity to ask questions.  Aime Black, the Wellington based education advisor shared some tips on how to overcome culture shock and becoming accustomed to American living.

After completing the pre- departure presentation, students continued to ask questions and discuss future plans with others. The pre- departure orientation was helpful to students in preparing them for their journeys abroad and in connecting them with others that will share similar experiences in the near future.

Find out more about Studying in the U.S. on our Education Advising page.