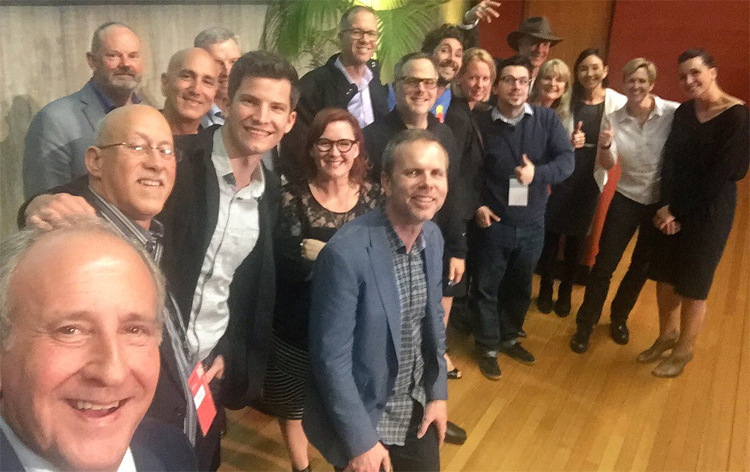 Lasting only a day, but packed with enough advice and inspiration for a whole week, Project16 was a crash course in making dreams reality, achieving success and doing the unthinkable.

The conference kicked off with an address by U.S. Ambassador Mark Gilbert. It is always appreciated to hear somebody speak their pepeha (introducing themselves), but it was a truly humbling experience to hear Mr. Gilbert, a non-Māori-speaking U.S. delegate, welcome the professionals who crowded the Auckland University of Technology’s WG403 lecture theater that morning with Māori language and culture. This was followed by a quote that provided great insight into what would turn out to be an incredible event; “Keep dreaming, keep imagining the possible, and then act.”

The broad theme of Project16 was the importance of creativity – and in particular, story-telling – in business.

The first speaker of the day was the founder and CEO of Verge, Matt Hunckler. He took us through his fool-proof system of creating the perfect pitch that would win the capital needed for entrepreneurs and their start-ups. His approach to the perfect pitch was summed up with the acronym THREAD – target, hook, relate, escalate, ask and deliver – which he described a framework for optimizing opportunity.

On the 🎙from the 🇺🇸 @Hunckler Founder of @VergeHQ keynotes #project16 – the magic of the pitch – the THREAD method pic.twitter.com/R8tlIjLkJv

Matt’s analysis of how to pitch and take the first steps towards success was complemented by comments from Hal Josephson, the founder and CEO of MediaSense. According to Hal, business is constantly about strategizing, pivoting, and revisiting your plan, which isn’t always a linear circle so you have to do it every quarter. Networks are vital and must be treasured, as business success demands that time be spent building and maintaining strong relationships. Above all, Hal advocated the commercialisation of innovation in New Zealand, and that we as a nation need to have greater confidence in exporting our ideas to the world.

This vision of development of New Zealand’s ‘innovation economy’ was amplified by Ceri Wells, a founder of James & Wells, who claimed that ideas were New Zealand’s next big revenue stream. Ceri explained that New Zealand is a hub of creativity that we are not tapping into, and encouraged us to look at what we’ve already got, and think about how we can leverage it for commercial purposes. Ceri’s critiques of contemporary New Zealand culture and government policy, which he saw as acting as discouragements to innovation, were followed by feasible solutions and means of capitalising on New Zealand’s innovation. His adroit assessment of the current situation was an inspiration and made bigger and bolder ideas and concepts, such as the possibilities of virtual reality as expounded by Noah Falstein seem to be essentially within our grasp.

Noah has the enviable title of Chief Games Designer at Google, and the influence of his work was clearly demonstrated in the reverence afforded to him by Michelle Dickinson in her introduction. Noah discussed effective story telling in the 21st century and how we can recreate old technology to find new conventions, especially through the use of game play. He urged us to think about the differences between linear and interactive storytelling, and that we ensure that we transmit complete authenticity so that we don’t run the risk of discontinuity. Noah explained that the risk of discontinuity arose when your story becomes inauthentic and the audience starts to think that the ending is their choice.

On the 🎙 @nfalstein from @google 🇺🇸 at #Project16 – storytelling, interactivity and learning through games…. pic.twitter.com/IThczYGevE

Noah’s talk, including a discussion of the different projects that Google is pursuing in the fields of augmented and virtual reality, not only concerned the possibilities that technological advances bring but also the bond between story-telling and business. This was echoed by Robert Moritz’s claim that a good business brand is made through illustration, rather than description, and Tash McGill’s explanation of successful marketing through telling stories of human experiences. The narrative, which Noah clearly demonstrated as being so much more than a standard ‘beginning, middle, end’ story, is key – how we tell stories and what stories that we tell are vital to strong businesses and creative innovation. Whether it’s a story of how failure is imperative to achieving success, as Robert May explained, or stories of the importance of luck and how to be a lucky person, as outlined by James Hurman, we need to learn how to incorporate our ideas into creative stories and sell them to the world.

🎙@tashmcgill at #project16 – 👏👌get back to the simplicities & think about the real human experience. pic.twitter.com/ajj94CgW0f

Best #project16 entrance to stge goes to @imrmay -know when to hold 'em, know when to fold 'em. How to pivot in biz pic.twitter.com/Gnut0vhL9e

Olivia Hall, part of Nancy Gilbert’s Wahine Toa series, gave a special presentation on the connections between business and nature. Olivia mentioned that some of your best ideas are inspired by nature or come about when you are one with nature.

It is difficult to summarise what the diverse collection of speakers at Project16 taught us, but the value of communicating and realising our ideas through story-telling, not matter in what shape or form, comes very close indeed.