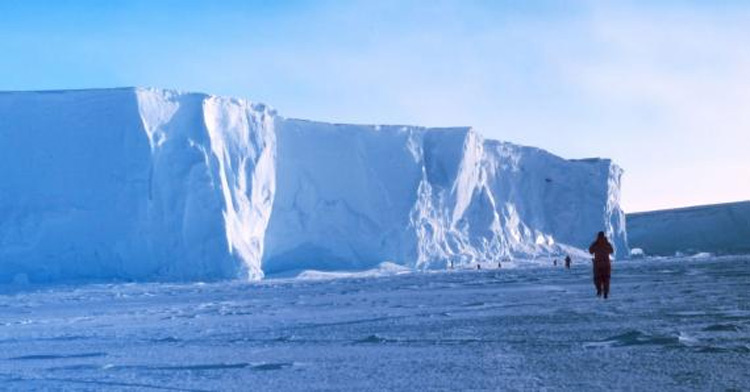 The Ross Ice Shelf at the Bay of Whales. Photo credit: NOAA.

The Ross Sea is not going to make your short list for beach vacations. It is far away.  It has no resorts.  And it is really, really cold.

While this 3.6 million square kilometer expanse of Antarctic waters may not be hospitable to humans, it is ideal for many plants and animals from emperor penguins, leopard seals, and whales, down to the tiniest plants and krill that are the first links in a diverse and productive food chain.

The Ross Sea is one of the last great ocean wilderness areas on earth, relatively unscathed by human activities, including commercial fishing. But that could change as fishing fleets push further south, driven by demand from growing populations. Meanwhile, climate change is altering the Ross Sea’s temperature, ice cover, and chemistry — the basic conditions on which this fragile ecosystem has developed over millennia. Scientists and conservationists stress the importance of keeping the Ross Sea unspoiled, not only to protect the region’s unique ecosystem, but because it’s a living laboratory, offering scientific discoveries that can benefit us all. For example, scientists studying the physiology of seals as they dive in the Ross Sea spurred the development of life-saving treatments for oxygen-deprived, newborn babies.

One way to preserve the Ross Sea is to make it a marine protected area (MPA). An MPA would provide long-term, meaningful protection to the Ross Sea by restricting fishing in areas that are most important to marine wildlife and creating zones for scientists to research the effects of fishing and climate change on this near pristine marine environment.

That is why the United States together with New Zealand and our partners are working through the Commission for the Conservation of Antarctic Marine Living Resources, or CCAMLR (pronounced “kam-uh-lar”), to make the Ross Sea an MPA. CCAMLR governs the use of waters all the way around Antarctica, and almost all of the 25 CCAMLR member countries agree that an MPA should be created in the Ross Sea.

This effort took a significant step forward at the CCAMLR meeting last month in Australia when China endorsed the Ross Sea MPA proposal put forward by the United States and New Zealand.   But we need all 25 CCAMLR Members on board, as the organization makes decisions by consensus. We look forward to working together constructively with Russia — the one remaining CCAMLR Member that has yet to endorse the MPA — to address its concerns so that the plan can be approved.

China’s endorsement builds on a string of recent agreements between China and the United States on ocean issues, including 13 new commitments made this year alone. Though it is gradual, we are making concrete progress.  The world’s two largest economies are now of like mind in protecting the Ross Sea.

The momentum for international cooperation on these problems is undeniable.  The first two Our Ocean conferences, initially hosted by the United States in 2014 and then by Chile in 2015, spurred billions of dollars in conservation initiatives. They also lead to new and expanded MPAs that cumulatively safeguard an area of ocean twice the size of India. The third Our Ocean conference is being planned for 2016 in the United States, and building support for a Ross Sea MPA will be high on our agenda.

Even as our planet has changed, the Ross Sea is remarkably similar to when British explorer Sir James Ross discovered it in 1841. Over the course of multiple expeditions to area, he described inlets, creatures, glaciers, and tides.  Just as the extreme, other-worldly nature of the place drew adventurers in before, its pristine beauty draws conservationists today.  Protect it and it will sustain us and the generations that follow.

About the Author: Judith Garber is the Acting Assistant Secretary of State for the Bureau of Oceans and International Environmental and Scientific Affairs (OES).