Home Home / News & Events / Reflections on The Life of a Diplomat and U.S. Department of State Refugee Coordinator 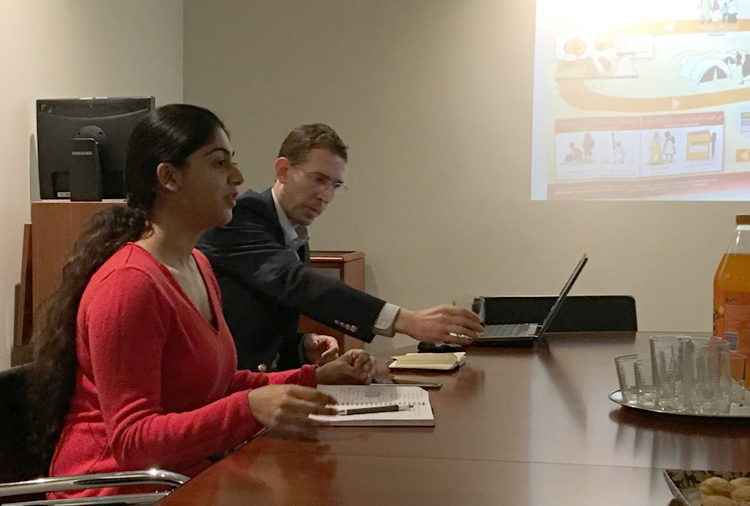 During the week of June 1st through June 20th, the U.S. Consulate General in Auckland participated in multiple events to celebrate World Refugee Day.

On Monday June 13th, members of the Auckland National Youth Council were invited to the Consulate to participate in a discussion on current world issues and the refugee resettlement process. James Coventry, a member of the youth council, shared his thoughts on the meeting.  [Disclaimer: The views expressed below are those of James Coventry and are not necessarily reflective of U.S. State Department policies.]

“With the number of refugees and internally displaced persons in the world at its highest since the Second World War, the complex issue of refugee resettlement is especially pertinent. As this year’s marking of World Refugee Day draws closer, Auckland Youth Council members met at the U.S. Consulate to discuss the topic with Craig Halbmaier and Shivani Ranganathan. Craig is a Political and Economic Officer with extensive experience in this field, and Shivani, an intern at the Consulate, has worked at a non-profit organisation that helps refugees through the process of resettlement in her hometown of Austin, Texas. What emerged from the meeting is that, despite there being a willingness from numerous governments and organisations to help as many refugees through this process, a lack of financial resources and the overwhelming nature of the problem makes a credible and sustainable solution elusive.

Craig’s background as a volunteer in the U.S. Peace Corps and working in nations such as Uganda and Burma has allowed him to witness the hardships that refugees endure and the lengthy process of their resettlement. This process was outlined further by Shivani, who explained how refugees that manage to be resettled in the United States are aided by volunteers as they begin a new life. Although refugees are provided with food stamps, advice on strengthening their CVs, and some employment opportunities, I was struck by how daunting a prospect it would be to have to adjust so quickly to a new country on the back of escaping from the trauma of war, natural disaster, or persecution. It is made even more daunting when one considers the opposition that the current influx of refugees from the Middle East and Africa has been met with.

United Nations agencies have approximately U.S. $6 billion in donations?, which must be negotiated from national governments and private donors, to address this mass human displacement, and this remains a grossly unsubstantial sum.

As a historic aside, Craig also gave us an insight into the legendary status that the former Secretary of State, Colin Powell, achieved through navigating a bureaucratic and political labyrinth to secure Congressional funding to update the U.S State Department’s IT system. It was a heartening reminder that logistical dilemmas can be overcome, with the requisite effort and skill to do so.  I was also struck by his statement that despite the record levels of human displacement, we are actually living in one of the most peaceful periods in human history. This paradox may seem confusing and bizarre, but I feel that there are grounds to find optimism from such a finding. Despite the unnecessary opposition and frustration that those who seek to help refugees encounter, progress is still being made, and what can be done with the resources available is being done.

It was an engaging time where students provided thoughtful insights on what they thought were the most prominent issues in the world today. All individuals present were able to contribute to a meaningful discussion.”

On Friday June 17th, as part of our World Refugee Day outreach, United States Diplomat Craig Halbmaier was invited to Kelston Girls’ College in West Auckland as their main assembly speaker. In celebration of World Refugee day on June 20th, Craig shared his life experiences as an American Diplomat and Refugee Coordinator with 350 senior girls.

During the assembly, Craig provided thoughtful insights on his tours in Kenya, Burma, and Uganda prior to his arrival in Auckland.  The students were active participants and were excited for the opportunity to answer questions from Craig.  He thoroughly explained the American refugee resettlement process and encouraged students to remain engaged with the world they live in.  Students asked important questions on how they could make an effort to improve the world around them and were eager for the possibility of creating positive change in the future.