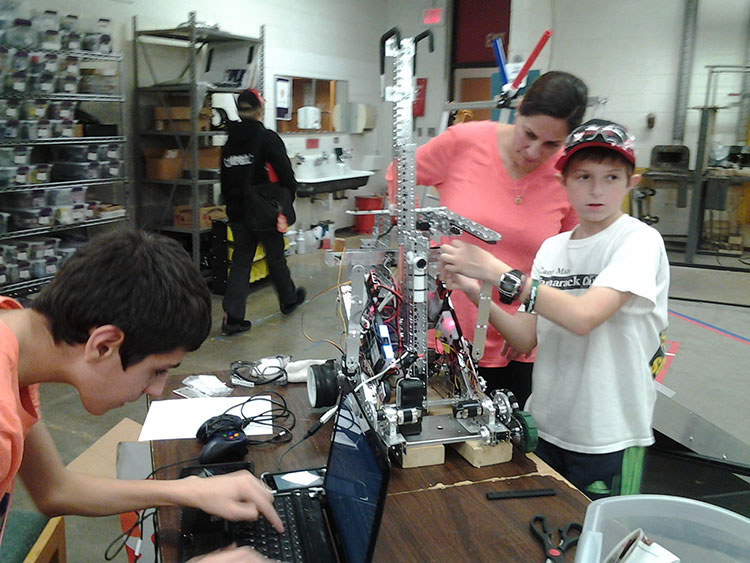 Most people don’t participate in robotics in New Zealand because most people don’t know what it is, but it is the fastest growing “sport” in my US school district, Bloomfield Hills, Michigan. Sitting in my dining room in Waikanae Beach at 1:00am on December 20 to Skype my team members instead of getting a good night’s sleep may not have been the best idea for my health, but I still wanted to be there with them in our first trip to the state-wide Robotics Tournament.

The type of robotics I am talking about, of course, is FIRST Tech Challenge, also known as FTC, for middle schoolers. FIRST (For Inspiration and Recognition of Science and Technology) was created in 1989 to help children learn about technology and to become leaders in science, technology, engineering and math outside of school (firstinspires.org). Ten years later they joined with LEGO and now this non-profit organization offers opportunities for K-12 students to participate in FIRST Lego League Junior, FIRST Lego League, and FIRST Robotics Competition (FRC).

At a county-level FTC tournament in November my team, The Golden Gears, got fourth place in robot game points but then lost in an elimination round. It seemed that we wouldn’t progress from that tournament to the next stage of competition until the last five minutes of the award ceremony. As they were announcing the final award, the INSPIRATION AWARD, they called our team up. We thought we had received just a regular award, but then we were the first team to be announced to go to States, the state-wide tournament. Our coaches thought that we got the award because our team had done so many outreach events. These included sharing knowledge about technology, learning things from different people, and helping non-profits in our community. We had demonstrated the FIRST core values.

I was really excited that we had won but then realized that I would be in New Zealand when the next round happened. My friend and I had been working on the media side of things. We had set up Instagram, Vine and YouTube accounts. I had designed a website for the team on a website builder goldengears7043.webs.com. We are a rookie team. In 2016 we will make a real website. We decided that for our presentations for the judges I would record my part of it on my friend Josh’s iPad just in case the Skype connection didn’t work. Most tournaments take place in schools so the wireless Internet connections are never reliable.

When I Skyped with my team members they got excited to see me until the connection cut out (darn school gyms). I waited and waited and waited. Eventually I fell asleep. Later that day I got the news in an email. The 2015-2016 game is based on rescue situations. We could have scored points by having our robot move debris, reset beacons, “rescue” climbers, and climbing up the mountain. We didn’t do so well on the field, for different reasons, across five matches. But once again, just like in the previous tournament, we had won a non-field-related award, the MOTIVATE AWARD. So, now FTC Team #7043, The Golden Gears, moves forward to compete in the Super Regional Competition, to be held in Cedar Rapids, Iowa, in March, 2016.

On the FIRST website Megan Smith, United States Chief Technology Officer (CTO), Office of Science and Technology Policy, says “I had incredible teachers who showed me the magic of science and technology by letting me do it myself. That’s what FIRST is all about.” What I have learned is that Robotics is a team sport that can involve all sorts of technology, friendship, and teamwork, not just robots. National Robotics Week will be held in April, 2016. There are FIRST Lego League teams in New Zealand so check them out here.