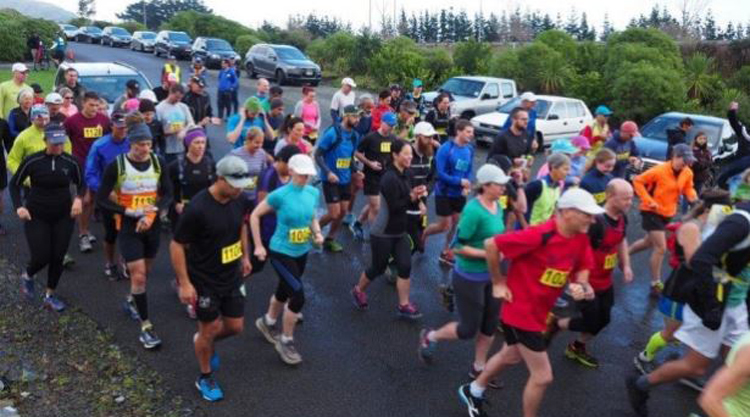 The torrential downpour that plagued the Kapiti Coast stopped just in time for approximately 200 runners and walkers to pay tribute to the U.S. Marines stationed along the coast during WWII.

U.S. Embassy Wellington, New Zealand staff, including five active duty U.S. Marines, ran “In the Footsteps of the Marines” on the morning of Sunday, May 29, 2016. In spite of the poor weather throughout the weekend, all participants finished the scenic and steep 13.4-kilometer course with pride in their hearts and smiles on their faces.

Generally, “In the Footsteps of the Marines” starts at the Whareroa Farm entrance at MacKays Crossing, Paekakariki on the Kapiti Coast. From there, it continues along Emerald Glen Road, up Waterfall and Maungakotukutuku Roads, and down Campbell’s Mill Road. Walkers and runners move along sealed and unsealed roads, bush and clay tracks, and finish back at the Whareroa Shelter. This year, due to excessive rain and risk of serious injury on the downhill slopes, participants ran to Maungakotukutuku Valley Road and back to the farm.

Since 2012, this annual event has been conducted on the Sunday before Memorial Day – the day when America remembers its servicemen and women who died while serving our country.

Between 1942 and 1944, more than 15,000 U.S. Marines were stationed at Camp Russell (now Queen Elizabeth Park), Camp Mackay (now Whareroa Farm), and Camp Paekakariki (now Paekakariki Village). The 13.4-kilometer route retraces the daily “hump” (tramp/march) of the Marines based in the Paekakariki area in the vicinity of the Kapiti Coast during World War II, as described by Leon Uris in “Battle Cry.”

Find out about The Kapiti U.S. Marines Trust.