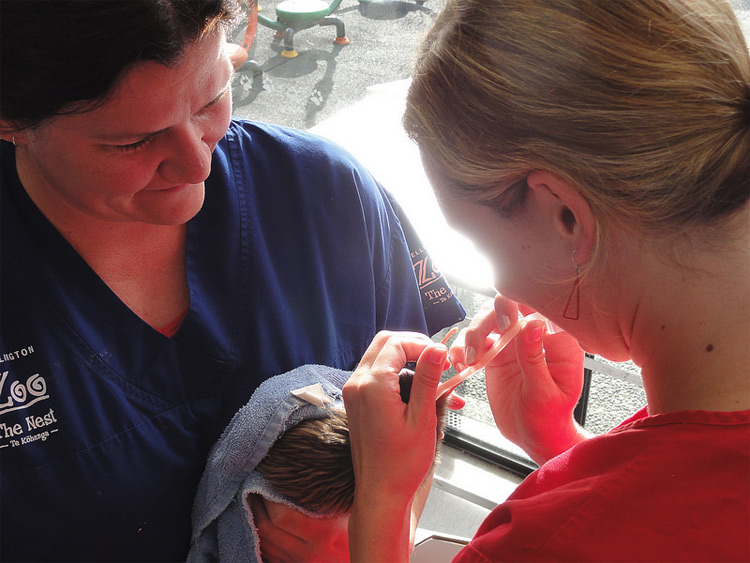 On the last weekend of Save Kiwi Month we’d like to share an update from the wonderful Kathy Brader, senior bird keeper at Smithsonian National Zoo on her work with kiwi. We interviewed Kathy last year at Wellington Zoo, when she was in New Zealand for her investiture as an Honorary Member of the New Zealand Order of Merit, for services to kiwi conservation.

I am Kathy Brader and a senior bird keeper here at the Smithsonian National Zoo in DC, although I work with variety of species of birds from around the world by far my favorite is the kiwi. I have been lucky to be able to work with these special birds for 28 years. One of my roles is the Studbook Keeper and the Species Survival chairperson for Brown Kiwi held outside of New Zealand. One part is to keep track of the birds and also to arrange pairings. I also help to recruit new zoos and to educate not only the public but in training new zoo staff to the weird and wonderful life of kiwi husbandry. Although there are lots of great avian people here when it comes to kiwi I like to say about the only thing kiwi have in common with other birds is that they have feathers and lay eggs. By having this program I help to ensure that all kiwi are kept to the high standards that have been developed by great folks in New Zealand.

When I started working with kiwi in the US only 4 zoos had kiwi, (and about the same in Europe), we have grown to 7 zoos in the US and have several more zoos that will come aboard in the 5-10 years. Our population in the US is currently 22 birds (15 males and 7 females). By cooperating with each other we have increased our successful reproduction and raising awareness of kiwi to more people.

At the Smithsonian National Zoo we hatched the first kiwi to hatch and survive outside of New Zealand in 1975, his name is Toru and he just celebrated his 40th birthday this past January. It was another 30 years before we hatched another kiwi, since 2006 we have hatched another 7 chicks. We also open a kiwi science and breeding center at our Conservation Biology Center in Front Royal, Virginia where we have 5 kiwi including a pair of New Zealand hatched kiwi that came over in 2010.

I also began a program of collecting natural molted kiwi feathers from all the zoos which I then take over the New Zealand embassy here in DC. They are gifted back to the Maori who use them to repair Kahu kiwi (cloak) and for new projects. It’s one way to say thank you to people of New Zealand of allowing us to work with kiwi.

We just celebrated our 25th year of our education program called Meet A kiwi, the only place outside of New Zealand where one can meet and see a kiwi up close. Over the years we have entertained people from all over the world, kiwi are the “pandas’ o the bird world!

So as kiwis are celebrating October as Save the Kiwi month, the overseas cousins are gearing up for what we hope will be a larger number of kiwi chicks hatching out, as we have 5-6 new pairs since last year who we hope will really like each other.

October is Save Kiwi Month & New Zealand’s national bird is in trouble – if we did nothing, we could lose them from the wild within a couple of generations. The good news is that there are lots of ways that you can help make sure this doesn’t happen. Visit Kiwis for kiwi website for more information on how you can help.  Join the Quest forKiwi and learn more at www.kiwisforkiwi.org
‪#‎SaveKiwiMonth ‪#‎kiwisforkiwi