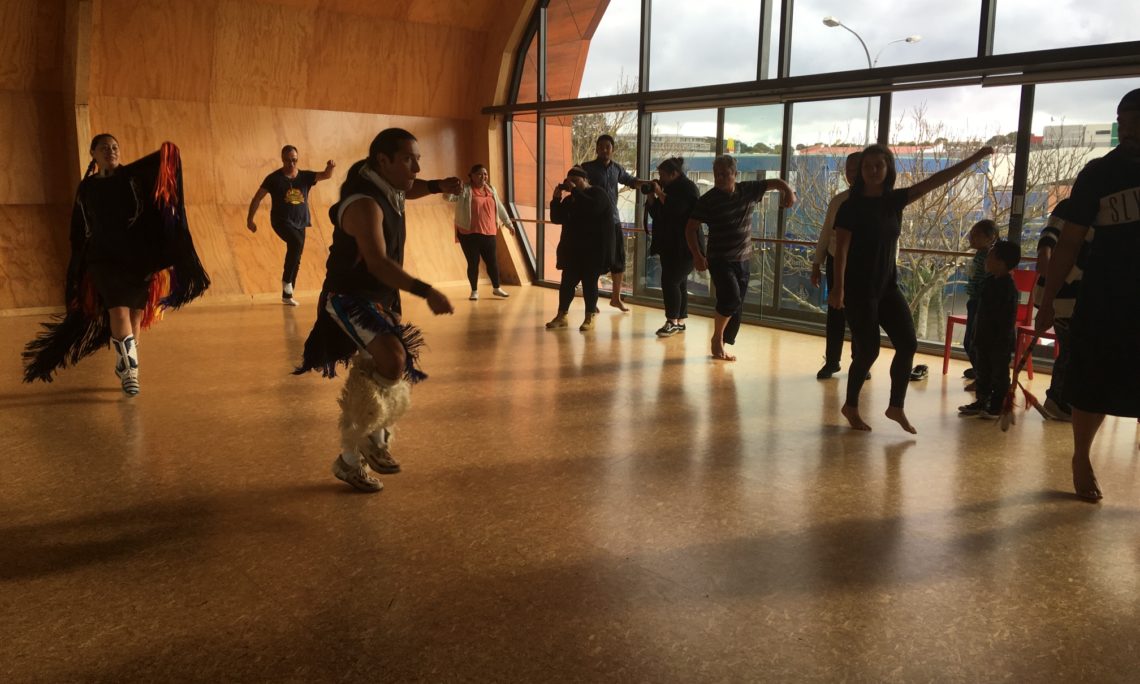 By staff in the Public Affairs Section, U.S. Consulate Auckland.

Sewam American Indian Dance was founded by award winning dancer and educator, Eddie Madril to bring the music, arts, and culture of Native American dance to audiences around the world. Specializing in the dances of United States Plains Indians, Sewam Dance has performed across the United States and internationally, enriching audiences’ understating of American Indian cultural traditions and celebrating the diversity of our varied communities. From September 6-9, 2016 Eddie Madril and Sara Moncada generously shared their time, cultural history, and wisdom with young New Zealanders.

Eddie and Sara were warmly welcomed to Rotorua Primary School with a powhiri ceremony by two hundred students of ages 4 through 12. In response, Eddie shared a traditional honor song to mark the occasion and open the space to sharing cultures. Sara demonstrated traditional dances typically presented in ceremonies that can sometimes last 3 or 4 days and nights, depending on the tribe and ceremony. Eddie shared a men’s fancy dance that showcased a more contemporary Native American style that was developed around the late 1800’s for presenting, among other places, in traveling Wild West shows. Through these variations in dance, students were given insight into the treasured place of different dances in Native American culture. The school expressed their appreciation for the unique educational experience with a haka tautoko and waiata.

Next on their Rotorua tour, Eddie and Sara visited Otonga Primary School. The auditorium was filled with over six hundred students ranging from ages 5 through 10. With Otonga students, Eddie and Sara explained the meaning of their outfits and other elements of their traditional dress that reflect the purposeful relationships with nature and community. For example, the eagle feathers worn on their headdress connect and send peoples’ positive thoughts, prayers, and energies to the creator above, as eagles soar the highest in the land and can carry such messages. The students were amazed to learn the significance and importance of Native American regalia and traditional clothing.

The following day, Sewam American Indian Dance visited Auckland. At Pakuranga Heights School, Sara and Eddie were welcomed by a hundred 8-10 year old students. Eddie shared a Native traditional creation story shared by tribes in the Southern California region of the United States. The story describes how humans and animals came into being through respect and community spirit, and also explained natural events like earthquakes. This story was of particular interest to the school since New Zealand, like southern California, has experienced a number of recent earthquakes.

The final school that Eddie and Sara visited was Point England School where they met with a hundred and fifty 11-13 year old students. Eddie and Sara taught the students phrases in Native American sign language, which differs from other sign languages. Because there are over 550  different tribes in the United States, each with different languages, environments and customs, Native American sign language was a traditional form of communication indigenous peoples developed in order to be able to communicate and exchange goods with each other.

At all schools Sewam American Indian Dance got students up and active. Students learned sign language, the basics of the traditional hoop dance and the community pow wow dance. They were thrilled to be a part of such an educational and interactive experience in Native American traditions, and it was a very special event to participate in such a meaningful cultural exchange.

Eddie and Sara squeezed-in time for a live interview with Radio New Zealand. They shared stories about why they dance and the integral nature of dance within Native American life, especially for their Pascua Yaqui tribe. This was a great opportunity to share their experience with the whole of New Zealand. To listen to the Radio New Zealand recording click here.

The pinnacle event for Eddie and Sara was their presentations at the Ka Haka Symposium at AUT’s Te Ara Poutama, the Faculty of Maori and Indigenous Development. Artists and academics gathered to discuss the relationship between performance and power in the development of Maori and indigenous identities, cultures, and communities. The Ka Haka Symposium was streamed live, to watch the replay click here.