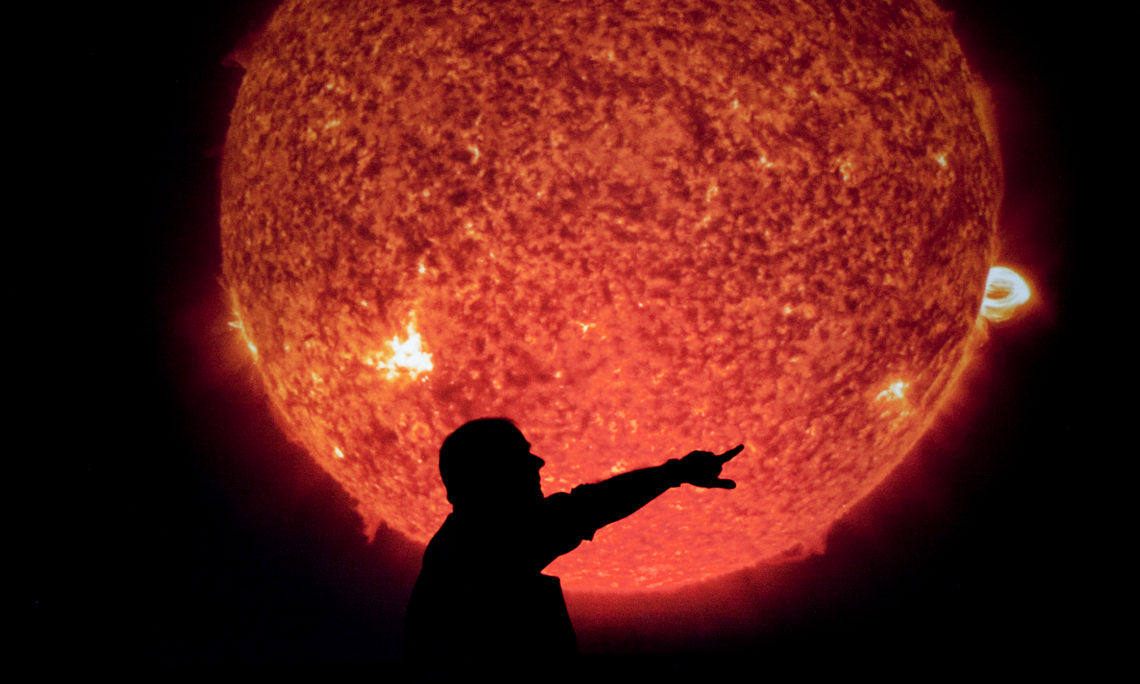 Professor Craig Rodger is the Head of the Physics Department at the University of Otago in New Zealand. His primary research field is “Space Weather”, and he also acts as an independent advisor to NASA. He has travelled multiple times to Antarctica, won a Fulbright New Zealand Scholar Award in 2015 – and plays a significant role in a U.S.-managed, NZ-created global lightning tracking network.

“Space Weather” isn’t a term you commonly hear.  But, it is absolutely real – and poses a risk to those on Earth.  So what is it?

“It is a set of processes triggered by the sun which impacts our technological society,” says Craig. “It can damage satellites, cause GPS navigation to be degraded, increase the radiation dose to commercial airline passengers, and in extreme cases, impact our power networks and infrastructure, or cause satellites to fail.”

“There are so many forms.  Auroras are something people often associate with space weather, but it isn’t always. You can have changes in the magnetic field around the Earth, changes in the thickness of the particles surrounding the earth –  the Van Allen Radiation Belts – and increases in ‘hot particles’ slamming into the atmosphere,” Craig explains.

Craig is highly active in this field, particularly when it comes to Van Allen Belts – which is where his work with NASA enters the picture.

Firstly – what is a Van Allen Belt?

“A zone of energetic charged particles, most of which originate from solar wind, that are captured by and held around a planet by that planet’s magnetic field,” says Craig. “By trapping the solar wind, the magnetic field traps those energetic particles and protects the Earth’s atmosphere from being blown out into space.”

Craig’s work focuses on these belts, particularly what happens when electrons (i.e. energy) in the solar winds impact the belts. As Craig puts it, his work looks at “how electrons are lost from the belt, how they scatter after hitting the atmosphere, and how they impact the Polar Regions where they arrive.  Think of a high energy aurora – but these are so energetic they don’t make pretty lights, they make X-rays. I study the loss from the radiation belts, into the atmosphere, and the consequences on the atmosphere and ozone, climate and the environment, and communications and technology.”

As you might imagine, these consequences, and the belts themselves, are of significant interest to a number of scientific agencies, NASA among them.

Thus, when it came time to select scientific instruments for a USD$700m space probe mission to study the belts – the Van Allen Probes – Craig was tapped to join an independent NASA review panel in 2005.

He found himself travelling to Washington D.C., discussing instruments, solar winds and space weather with NASA, and having what he describes as the scientific time of his life.

During his time collaborating with NASA, Craig also became aware of a strong, historic tie that New Zealand has to NASA – and his own work.

“The dawn of the space age is the start of the U.S.-NZ collaboration in this sector, built under the direction of a Kiwi by the name of William Pickering.”

Explorer 1 was the first satellite launched by the United States, sent into space on January 31, 1958. Launched on a U.S. Army Jupiter Rocket, NASA’s Jet Propulsion Laboratory (JPL) designed, built and operated the satellite that would serve as the rocket’s payload, under the direction of Wellington-born William Pickering, who served as JPL’s Director for 22 years between 1954 – 1976.

Incidentally, it was this inaugural NASA/JPL satellite, Explorer 1, with its data seemingly impacted by radiation during its orbit around the Earth that led to the discovery of the Van Allen Belts – named for U.S. space scientist James Van Allen who designed the sensors carried aboard the satellite.

And so, a New Zealander from Wellington, who went to work at NASA, laid the groundwork for a Kiwi from Dunedin to work years later with NASA on a successor project.

Craig was also fortunate enough to delve further into this unique historical link.  He worked with U.S. partners on Van Allen Belt research and Van Allen Probe data, during his 2015 Fulbright exchange to the United States, split across Van Allen’s alma mater the University of Iowa (and its iconic Van Allen Hall), and the University of Colorado Boulder’s Laboratory for Atmospheric and Space Physics (LASP) – which manage a number of instruments on the Van Allen Probe.

But this isn’t the only area of U.S.-NZ scientific collaboration Craig has been involved in – click here to read about his work on space lightning (and normal lightning).