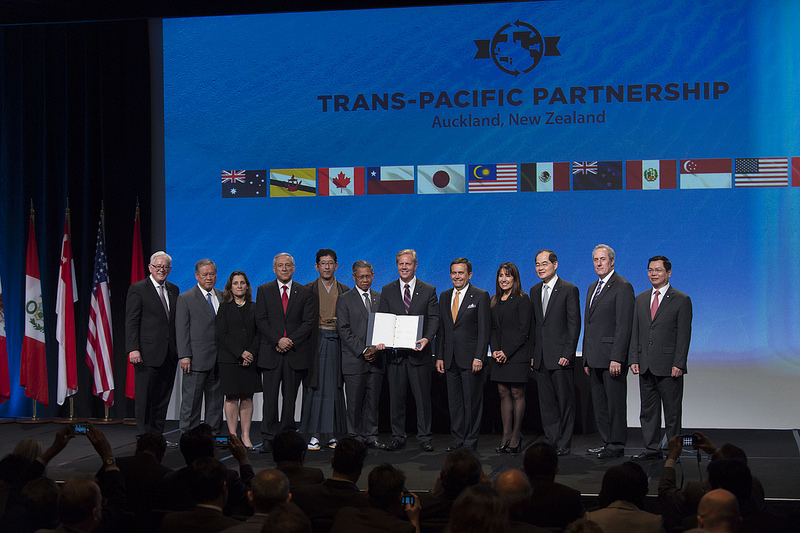 The signing of the TPP in Auckland, New Zealand. Photo credit: U.S. Department of State.

Statement by the U.S. President on the Signing of the Trans-Pacific Partnership:

For more than five years, a group of 12 countries have negotiated a forward-looking trade deal that sets new, high standards for trade and investment in one of the world’s fastest growing and most important regions. Today, these countries signed the Trans-Pacific Partnership – a new type of trade deal that puts American workers first.

Right now, the rules of global trade too often undermine our values and put our workers and businesses at a disadvantage. TPP will change that. It eliminates more than 18,000 taxes that various countries put on Made in America products. It promotes a free and open Internet and prevents unfair laws that restrict the free flow of data and information. It includes the strongest labor standards and environmental commitments in history – and, unlike in past agreements, these standards are fully enforceable. TPP allows America – and not countries like China – to write the rules of the road in the 21st century, which is especially important in a region as dynamic as the Asia-Pacific.

Put simply, TPP will bolster our leadership abroad and support good jobs here at home. That’s why I released the full text of the agreement three months ago for all to see, and it’s why I’ll continue working with Democrats and Republicans in Congress to enact it into law as soon as possible so our economy can immediately start benefiting from the tens of billions of dollars in new export opportunities. We should get TPP done this year and give more American workers the shot at success they deserve and help more American businesses compete and win around the world. [source]

Statement by the New Zealand Prime Minister on the Signing of the Trans-Pacific Partnership:

Prime Minister John Key welcomed today’s signing of the Trans-Pacific Partnership Agreement in Auckland, confirming it will be overwhelmingly positive for New Zealand in supporting more trade and investment, jobs and incomes.

“Today is a significant day, not only for New Zealand but for the other 11 countries in the Trans-Pacific Partnership,” Mr Key says. “I’m proud of the role the New Zealand Government and officials have played in getting to this point.

“TPP will provide much better access for goods and services to more than 800 million people across the TPP countries, which make up 36 per cent of global GDP.

“The Agreement has been many years in the making and I acknowledge the efforts of all TPP countries in bringing negotiations to a conclusion.

“TPP is our biggest-ever free trade deal and is estimated to boost our economy by at least $2.7 billion a year by 2030. That will help to diversify our economy and mean more jobs and higher incomes for New Zealanders.

“It is New Zealand’s first FTA relationship with five of the TPP countries, including the largest and third-largest economies in the world – the United States and Japan. Successive New Zealand Governments have been working to achieve this for 25 years.

“As a country, we won’t get rich selling to ourselves. Instead, we need to build new global markets for our products and services, and TPP will help make that happen.

“I believe strongly that New Zealand’s future is in being open and connected to the rest of the world,” Mr Key says.

The next step is for member countries to ratify the Agreement so it can come into force.

“We will encourage all countries to complete their domestic ratification processes as quickly as possible.

“This is because the TPP is not only good for New Zealand, it is really positive for the Asia Pacific region.

“Other countries have already signalled an interest in joining TPP and this could lead to even greater regional economic integration. A more prosperous and therefore secure region, is in all of our interests,” Mr Key says. [source]