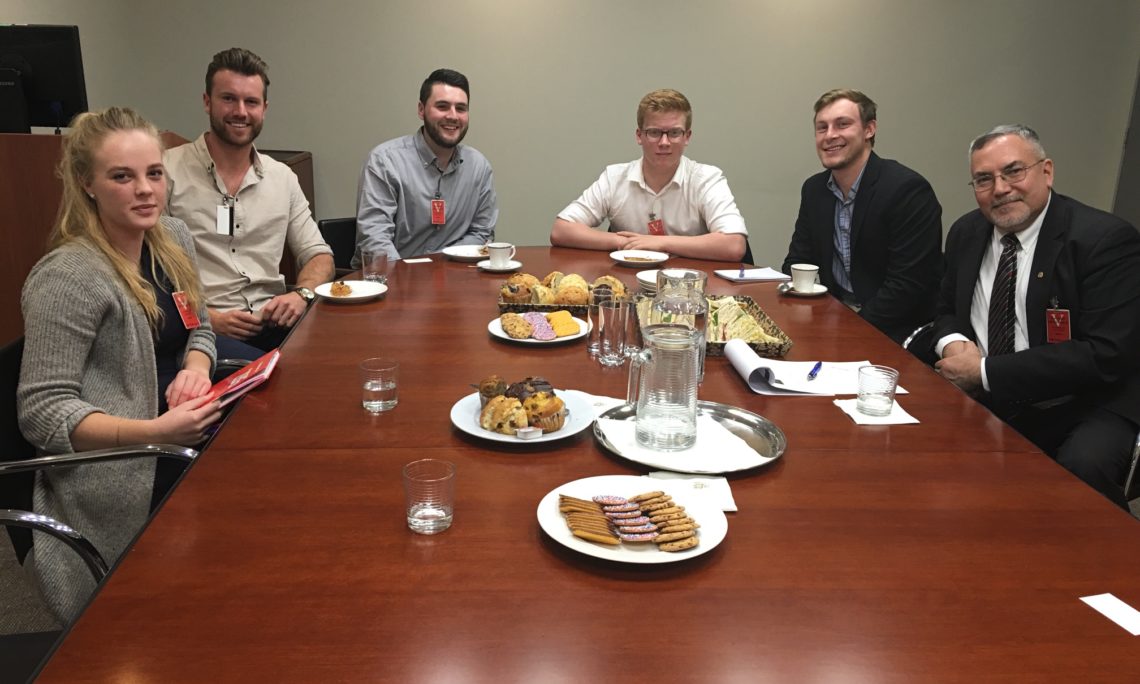 Risk is a fact of our everyday lives.  But what happens when an everyday risk becomes a one-off crisis?  The Auckland Youth Council met with a master of the science (and art) of risk mitigation and crisis management – and learned he had some, but not all of the answers …

Robert (Bob) Jensen is the senior managing director of Strat3 LLC, a consulting firm specializing in strategic planning, engagement and response.  From war zones to the White House, from disasters to diplomatic crises, Jensen has led national and international crisis management and communication efforts for events that have been on front pages and in the news around the world.  Jensen’s impressive credentials span thirty-five years and cross a broad spectrum of assignments, both inside and outside of the U.S. government.  Most recently, he served as the Principal Deputy Assistant Secretary for Public Affairs for the U.S. Department of Homeland Security, where he provided oversight and input to national risk assessments and strategy development for U.S. national security issues, including cybersecurity, natural disasters, pandemics, counter-proliferation, and counterterrorism.   Previously, Jensen was the spokesman for the National Security Council as well as for the U.S. Embassy in Baghdad.

Looking at the tragic effects of the Louisiana flooding and the Orlando nightclub shooting, it becomes clear that there are very different types of threats and crises that can sadly occur. In such occurrences, people tend to question whether it could have been prevented or at least mitigated. These are fair questions, but the truth is, there are countless threats and it is almost impossible to always foresee, let alone prevent them from ever occurring. Digging a little deeper, one begins to understand that crisis management and prevention are very complicated areas. One man who understands this is Bob Jensen. Bob has had nearly 35 years of experience specialising in risk assessment and strategic development within the field of crisis management and U.S. national security. His experience both inside and outside of the U.S. government makes him a reputable authority on these topics.

On August 19th, 2016, Bob Jensen met with members of the U.S.-NZ Youth Council at the U.S. Consulate in Auckland. As a member of this Youth Council, I was fortunate enough to meet Bob at this event and discuss with him numerous topics pertaining to crisis management and security. It was incredible to get a sense of how much research and planning is required to devise viable strategies and contingency plans for potential disasters. Bob explained that these contingency plans contain numerous aspects, including guidelines around communicating with the public through media as well as how to contain the situation, particularly if it is a pandemic. During the meeting, it became apparent that, even if a contingency plan has been well devised and implemented, the Government and other organisations cannot foresee and fulfil every need. Therefore, it is vital for people to be as responsible and self-managing as possible in the event of a crisis. For example, in a natural disaster, if there is some warning, this can be as simple as ensuring you have enough food, first aid and resources before it hits. In contrast, threats such as terrorism and cybercrime require different strategies.

We live in a world that is increasingly technologically advanced. Although this has many benefits, it also means the risk of theft, fraud and abuse has increased. An issue that relates to this topic is privacy versus security. In the meeting we discussed the importance of the Government working with the private sector for the purpose of public safety and security. This is a vital, but complicated relationship. The recent legal dispute between Apple and the Federal Bureau of Investigation over access to the iPhone used by a suspect in a mass-shooting is an example of how complicated it is. What I realised from this discussion is the need to try and address both sides of the coin. On one side people ought to have basic privacy rights whereby unwarranted surveillance is not tolerated. On the other side, law enforcement authorities need to be able to access sufficient data for security purposes. In recent cases of mass shootings, where perpetrators seem to have become self-radicalised through the internet, one could argue that his suspicious online activity and planning could have been traced, which may have prevented the attack. However, this is a very complicated issue and it is important to try and understand the different perspectives on it.

Considering different perspectives and not jumping to an impulsive conclusion is perhaps the most valuable lesson I learned from this event. The more I listened to Bob speak, the more I respected his work ethic, knowledge and opinion. Reflecting back, I realise that, above all, I respect the way he values people regardless of their ethnicity, status or where they came from. Bob shared a story with us of a memorable experience he had with President Barack Obama. He explained that there was a time when he was with President Obama and a group of others in the Eisenhower Executive Office Building (next to the White House). They were all walking to a room for a meeting when they passed a janitor. As they were passing him, President Obama went out of his way to greet this young janitor and thank him. It was a very simple thing to do and yet a very good reminder to value people. Amidst all the fear we face when crises occur, we must remember to treat people the way we wish to be treated. This can also be applied to the war against the ideologies of terrorist groups. For instance, I believe if we treat people as if they are terrorists, it is reasonable to assume that they are more likely to self-radicalise and fulfil that belief. However, if we treat that same person as a human being that deserves to be respected and valued, it is more likely that they will act in a respectable and valuable manner. At the end of the day, no matter what crisis occurs, we must remember that the majority of us want the same thing…to be safe and to be valued.