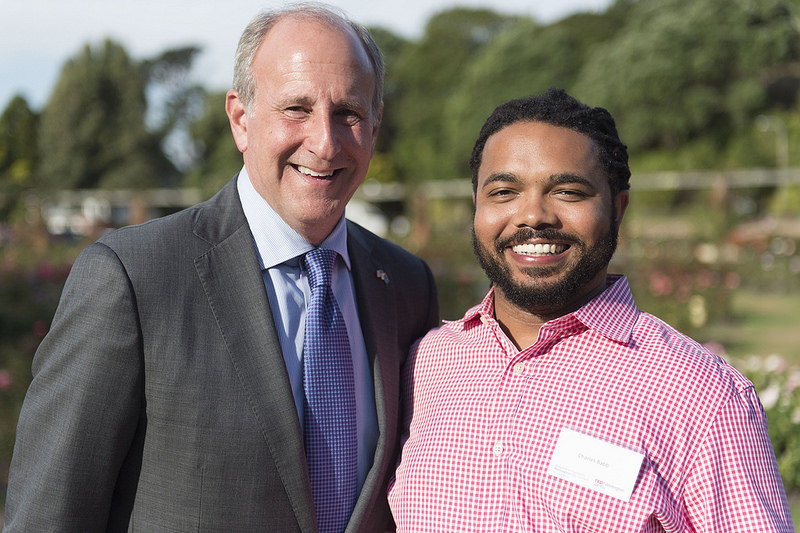 The U.S. Embassy were proud to host Charles Babb in Wellington, New Zealand to speak at TEDxWellington 2016. Charles is the Founder of Fairchild Consortium – a firm that has seasoned creatives and industry veterans venturing into Augmented, Virtual, and Mixed Reality development.

Charles Babb’s TEDx talk will be available in the coming weeks on the TEDx YouTube channel, but in short, he explained  The Possibilities of Uncommonalities – why diversity in the decision making processes of businesses (especially around the creative direction) is vital, but is currently missing in the gaming development industry.

On Monday March 7 Charles met with Ambassador Gilbert at the Embassy to discuss his visit to New Zealand and his work in innovation. We filmed a video interview with Charles in our Digital Studio, asking him questions about gaming development, creativity in STEM, diversity and entrepreneurship. Charles met with students for a roundtable discussion on all the above with the students asking questions about his career path and background. In the afternoon, he toured PikPok, a New Zealand owned game development company that has grown exponentially since 2007. Managing Director Mario Wynards and Charles shared some challenges current issues, and discussed meeting up at the upcoming Gamers Development Conference in San Francisco next week. In the evening Charles Babb was a guest of honor at the TEDxWellington VIP reception for speakers and sponsors. Ambassador Gilbert spoke, along with Wellington Mayor Celia Wade Brown and other event sponsors.

The following day Charles visited Creative HQ and met with CEO Stefan Korn. Creative HQ is dedicated to increasing the number of high growth businesses that fuel New Zealand’s economy through our incubation and acceleration programs as well as our grassroots entrepreneur initiatives and innovation services. Then it was off to meet up with startup Founders of Geo AR Games who are taking part of Lightning Lab XX – New Zealand’s first ever female founder focused business accelerator, has announced the 8 teams that have secured a spot in its 2016 programs. Charles gave some sound advice to Founder Aime Woken, and promised to stay connected around the augmented/life reality projects they are working on. Then it was off to the collaborative start-up, BizDojo, where Charles spoke with some of Wellington’s gaming community.

Find out more about Charles here.