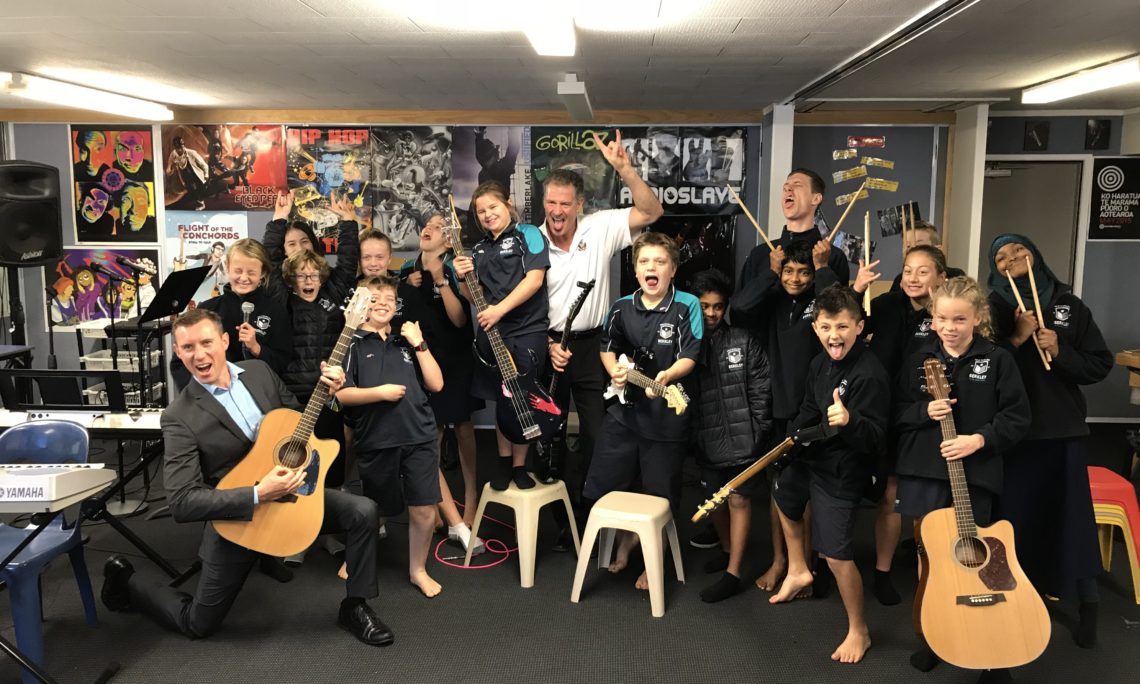 On Friday June 8, U.S. Ambassador Scott P. Brown visited Hamilton, New Zealand’s fourth city by size and the country’s largest inland center, for a program ahead of Fieldays. He started by catching up with Mayor Andrew King, who shared some interesting perspectives on the opportunities and challenges faced by Hamilton. Being a huge Rocky Horror Picture Show fan, Ambassador Brown was excited to take a photo with the Mayor next to Victoria Street’s iconic “Riff Raff” Statue.

Ambassador Brown then visited Berkley Normal Middle School, at the invitation of Labour List MP Jamie Strange. Jamie used to teach music at the school, and given the Ambassador’s own passion for music, they had a blast teaming up to teach the talented and enthusiastic “Kia Kaha” home class a song. Ambassador Brown then shared his own musical journey – from the first time he played guitar to redecorating his official residence in Wellington with rock memorabilia – such as the KISS drum kit. It was a fun departure from formal meetings for the Ambassador – and an inspirational moment for the class to see where music can take you in life!

This morning MP @jamiestrangenz showed me around the school he taught at, Berkley Normal Middle School, and I had a blast jamming with the kids – #musiceducation #learningrocks #lovethetron 🎸🥁 pic.twitter.com/5kQPyk0kJP

Next on the agenda was speaking to a large community group, hosted by the local MP for Hamilton West, Hon Tim Macindoe. The Ambassador gave the audience some insights into his background, and an update on some of the major developments in the U.S. – NZ relationship. Taking a lot of questions, the Ambassador enjoyed having a frank give and take on politics and diplomacy with the audience.  Tim had the Ambassador draw the raffle, one of the ceremonial duties of guest speakers at this monthly forum.

Thank you @timmacindoe for hosting me to speak to your constituents at the Café Agora, #Hamilton. It was great to have so many smart questions from an audience so interested in NZ-US relations 🇺🇸🇳🇿 #lovethetron pic.twitter.com/QOPGnUSDY5

A visit to the University of Waikato hosted by the Deputy Vice Chancellor, Professor Bruce Clarkson, was a great opportunity to explore two areas which are of close personal interest to Ambassador Brown, and are highly topical given recent global developments.

Associate Professor Dr. Ryan Ko, Director of the Cybersecurity Researchers of Waikato (CROW) Lab, and former faculty from Idaho State University, hosted the Ambassador. Ryan explained some of the work they were doing to detect, analyze, and – ultimately – prevent hacking and online criminal attacks against the critical infrastructure we depend upon for modern society to function. Think: power grids, air traffic control, banking systems – as well as our own household devices. It was fascinating to see the point where the internet had first “plugged in” to NZ – from Hawaii – in 1989.

Fascinated by the research of Dr Ryan Ko, and his students at the @waikato #CyberSecurity Lab, are doing to help keep us safe from #cybercrime #lovethetron pic.twitter.com/4loqGyHfS5

Finally the Ambassador had a briefing with Dr. Justin Kurland, head of Waikato’s new Security and Crime Science Centre – but originally from New Jersey. The research-driven, inter-disciplinary approach to preventing crime was of personal interest to the Ambassador, as was the fact that the Centre is already working with the NZ Police and other agencies on practical measures to reduce offending and the impact of crime.

All up, it was a fantastic visit to another wonderful part of New Zealand – and great to see some of the educational and research strengths of Waikato ahead of exploring their agricultural opportunities next week!