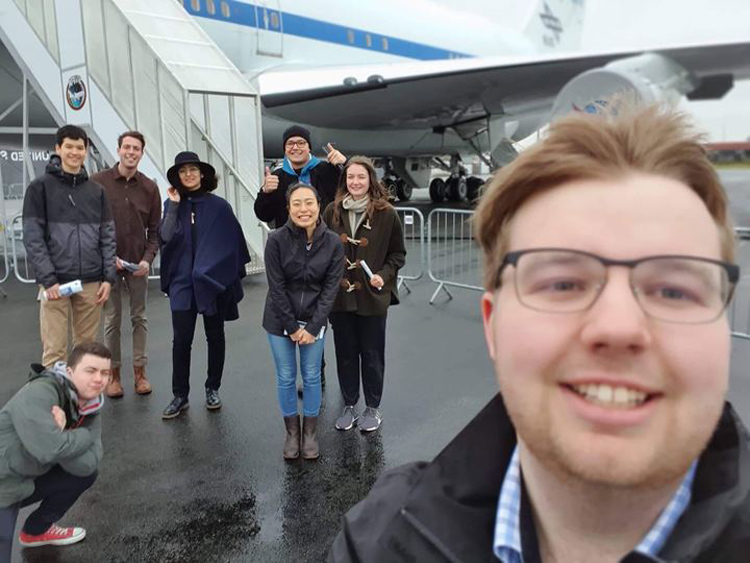 Christchurch-based U.S. Embassy Youth Councilor and New Zealand Broadcasting School student, James Fleury, shared his MetroNews article which highlighted the importance of engaging the public on scientific outreach being undertaken by NASA in Christchurch, NZ. This once-in-a-lifetime opportunity for the public, and VIP tour for members of the U.S. Embassy Youth Council, proved a huge success!

SOFIA, which stands for ‘Stratospheric Observatory for Infrared Astronomy’ opened its doors at Christchurch Airport for just a small handful of the nearly 20,000 people who inquired about the open day.

The 56m-long and 20m-high aircraft is part of a joint project between NASA and the German Aerospace Agency. It spends two months of the year in Christchurch because of the region’s dry, cold air, which allows for the infrared telescope’s best clarity.

The 2.7m telescope is used to help study anything from stars and black holes to the formation of solar systems.

American Embassy Programme and Events Coordinator, Lauren Murray, said the people of Christchurch had always been great hosts to the US Antarctic Programme, which had a strong relationship with the Embassy and the NASA SOFIA team.

“The open day served as a great way to thank the community for their hospitality and give Cantabrians a once-in-a-lifetime chance to see inside a NASA aircraft.”

Murray believed the best part of the day was seeing and hearing the public engage with the SOFIA crew and the enthusiasm of the scientists.

The aircraft observatory attracted people from all different backgrounds like university students and space-enthused families. This included members of the US Embassy Youth Council who were able to learn valuable information about the United States presence in New Zealand.

US Embassy Youth Council leader Josiah Tualamali’i said the opportunity for the council members showed the value the US Embassy in New Zealand places on connections with young people.

“SOFIA is particularly special as it shows the significant opportunities we have in our atmosphere to understand our world, who we are in it and the galaxies out there better.”

Tualamali’i believed introducing young kiwis to science inspires them to dream big and realise that just because we are a small country, doesn’t mean we have less to offer.

The SOFIA flies for 10 hours about three times a week with 30 people on-board, including engineers, guest scientists, flight planners and more.

Event organisers said they hoped the public tours could be continued in the future.