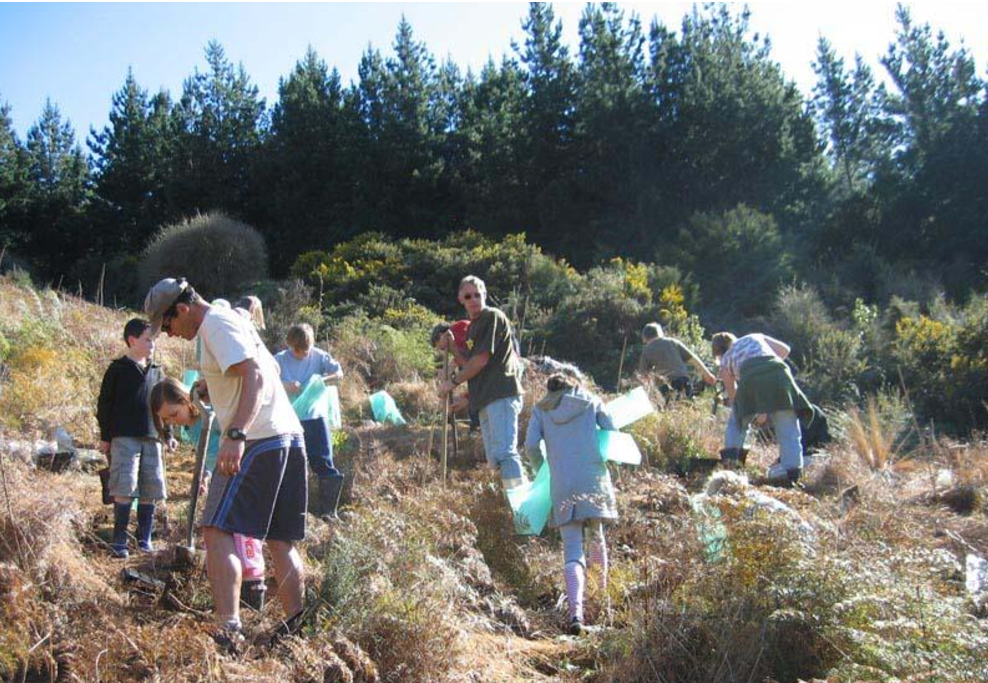 In 2016, a U.S. Embassy small grant award added the perfect touch of magic to ensure that our reforestation project could bloom – helping to transform the Rameka Carbon Forest just like Cinderella turned into the belle of the ball.

Planting may seem like a lot of work but it is actually a lot of fun. People enjoy spending a sunny winter’s morning outside planting trees and chatting. They see their work transform a barren field into a rug of bright green, young plants. Everything is filled with promise and potential. It makes for a good workout, too. And then it’s time to go home and relax and wait for the plants to grow.

Just watch out next spring though! That’s when the battle begins. And pest control is a battle that can last for several years. As long as young seedlings can be swamped by weeds and eaten by animals, they need to be protected. But a well-protected plant will reward with steady growth for decades. Pest control is the ugly duckling of the reforestation world, but as we know, ugly ducklings turn into beautiful swans.

Think New Zealand and think millions of sheep and cows and a range of defenceless native animals and plants living in ever pressured wilderness areas. The Abel Tasman National Park is one such wilderness area. This gem of the New Zealand outdoors is renowned for its long golden beaches and good weather. Thousands flock to walk along its length each summer. But just west of that national park lies a 98-hectare block of scrubby farmland. That’s where our Cinderella of reforestation is based – at the Rameka Carbon Forest.

Seeing the wood for the trees

So what exactly is a carbon forest? It’s a simple and effective way to mitigate climate change. In one of the most brilliant win-win arrangements on the planet, trees take carbon dioxide from our atmosphere (in a process called carbon sequestration), use the carbon to help them grow and release oxygen back into the atmosphere.

In 2008, we set up a trust and bought the Rameka Carbon Forest as a response to climate change.

Our primary goals are to:

And that’s what we’ve been doing ever since.

In early 2016, one of our supporters, Ginny Wood, took part in a fund-raising bicycle ride the length of the country. Ultimately, Ginny raised over NZD4,000 for native trees, and volunteers planted those trees on the property in late August 2016.

Then the U.S. Embassy grant kicked in. It is helping us fund a local pest plant and animal controller to work alongside volunteers in protecting and encouraging the growth of these native trees. The grant will be spent over two years, allowing the pest controller to:

So if you ever find yourself in the northwest corner of the upper South Island of New Zealand, why not pop along?  We’d love to see you, and who knows …we might just have some trees for you to plant.