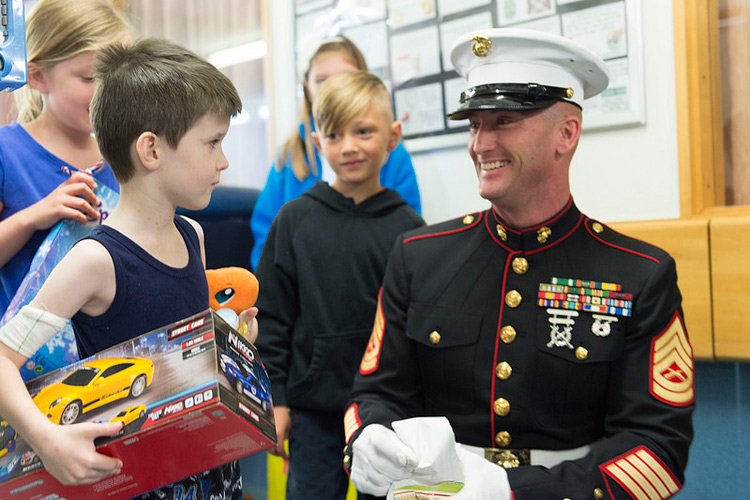 Detachment Commander Hammer says that the Marine Security Guard program, which protects U.S. Embassies around the world, enabled the Toys for Tots program to reach out “in pretty much every country in the world.” Photo credit: U.S. Department of State.

Wellington-based Marines have spent the last few weeks collecting toys for Kiwi kids who are having a hard time this holiday season. In the days before Christmas the Marines delivered them to the Wellington Children’s hospital and to the City Mission.

The U.S. Marines’ Toys for Tots program began in 1947 when a Reserve unit in Los Angeles collected 5,000 toys to give to less fortunate children in their local community. Since then, the program has distributed around 470 million toys, all around the world.

“I can remember as a kid going to the malls and seeing the Marines smartly dressed in their uniforms collecting the toys, I didn’t really know much about the program at the time, now it kinda seems full circle that I get to be that smartly dressed Marine handing out all the toys,” says Detachment Commander, GySgt Patrick Hammer.

A few days ago, First Lady Michelle Obama spoke of the amazing impact the Toys for Tots program has had, noting that the Marines were responsible for millions of moments of joy and gratitude.

“These Marines and their families make millions of Christmas wishes come true,” says First Lady, Michelle Obama. “That moment that little girl unwraps her first train set maybe, or a teenager puts on his first collared shirt or gets that computer game he’s always wanted but never thought he would get.  Or the struggling single parent that breathes a sigh of relief because there will be presents under the tree after all.”

Detachment Commander Hammer says that the Marine Security Guard program, which protects U.S. Embassies around the world, enabled the Toys for Tots program to reach out “in pretty much every country in the world.”

Sgt Eric Cruz hasn’t done this before and, even though it is not the kind of thing he thought he would be doing when he joined the Marines, he says he can’t wait to play Santa.

“This is going to be a new experience for me and I think it will be something good to have.”

Two of his Wellington-based colleagues may be able to let him in on what to expect.

Assistant Detachment Commander, Sgt Alexander Barham recalls participating in the program in Cairo and says that the Marines get something special out of it too.

“I got to do this in Cairo, Egypt, which was very unique. We gave to four orphanages at that time, around 130 children,” he says. “You gave them one and that’s all they wanted, you know that was perfect, that was enough and they would just run away and have their thing. They loved it. They never asked for something else, or needed something else, which I think is a good lesson for us. Just have what you need and be happy with what you have.”