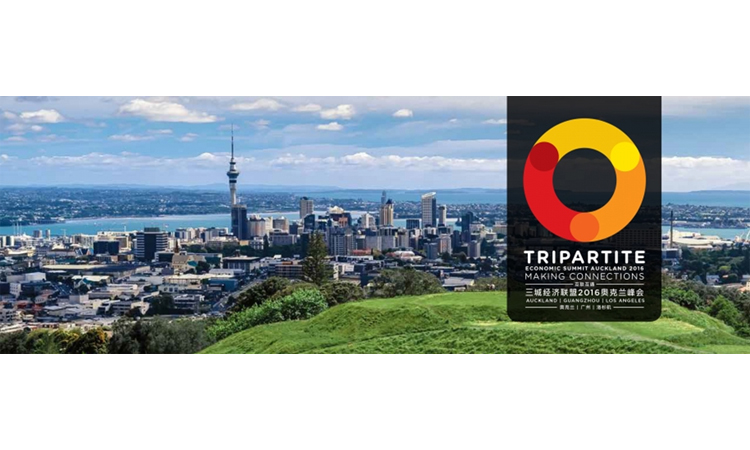 For a number of months, U.S. Consulate General in Auckland has been busy  the high-profile Tripartite Economic Summit between the cities of Auckland, Los Angeles, and Guangzhou, which took place from 16–17 May at the huge ANZ Viaduct Events Centre in Auckland.

Mayor of Auckland Len Brown was the host, and he was joined by the Mayor of Los Angeles, Eric Garcetti, and the Vice Mayor of Guangzhou, Wang Dong, along with Madame Li Xiaolin, President of the Chinese People’s Association for Friendship with Foreign Countries.

Ambassador Gilbert hosted a pre-opening night Summit reception on Sunday night for around 80 delegates and guests from all three cities at Consul General Melanie Higgins’ residence.  Entertainment for the evening was provided by LA based, Grammy- nominated jazz pianist Otmaro Ruiz, whose performances throughout the Summit were sponsored by the U.S. Embassy.

The Ambassador welcomed the guests, including Embassy-sponsored LA dancers Genevieve Carson and Tess Hewlett, who performed at the Summit Gala Dinner.  The Ambassador also gave special gifts to some of the principals, including: a signed Louisville Slugger for Mayor Garcetti; a Gilbert rugby ball for Mayor Brown; and a signed copy of American feminist writer Gloria Steinem’s new book for Madame Li (the Embassy sponsored Gloria Steinem’s visit to Auckland as part of the Auckland Writers’ Festival).

The Summit opened on Monday morning with a stirring powhiri welcome for delegates.  Mayor Brown then declared the Summit open for business and introduced the heads of the delegations.

Later on Monday evening, Ambassador Gilbert and Consulate staff joined around 150 members of the city delegations at a Discover LA Reception, hosted by the Los Angeles Tourism & Convention Board, at Auckland’s waterfront Ostro Brasserie.  Not content with just making welcome remarks, Mayor Garcetti wowed the crowd with an impromptu jazz duet with LA pianist Otmaro Ruiz.

Later, at the official Summit Dinner, Ambassador and Mrs. Gilbert were joined on the VIP table by Prime Minister Key.  During that evening’s gala dinner events, spectators were treated to a performance by the tri-city dancers.  The amazing dancers – from each of the cities of Los Angeles, Auckland, and Guangzhou – wow’ed the crowd with their moving performance, which was choreographed and practiced to perfection in only five days.  The dancers showed both that dancing transcends culture and showed that the three cities can come together to amazing results.

Another Embassy-sponsored speaker was Field Garthwaite – founder and CEO of Iris TV – who spoke at a specialists’ breakout session on “New Faces of Media Entertainment.”

Mayor Len Brown, Auckland Council, and ATEED, along with their partners and sponsors, put together an amazing agenda for the Tripartite Summit.