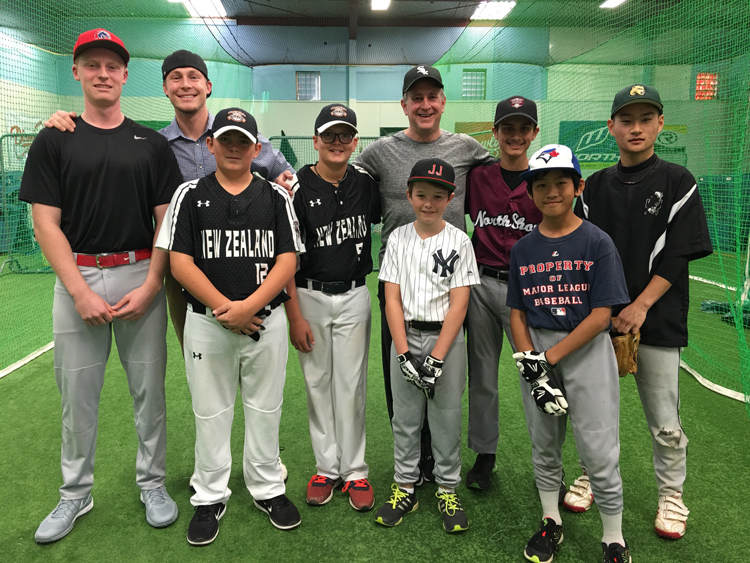 The Baseball New Zealand 13 and under team recently completed tournament play in the Cal Ripken World Series in Aberdeen, Maryland.  This year, the tournament field consisted of 10 champions from across the United States and 8 international teams representing Australia, Canada, Republic of Korea, the Dominican Republic, Japan, Mexico, Puerto Rico, and New Zealand.  Although the New Zealand team did not bring home the international trophy, they did etch a win against Australia on the sixth day of the tournament.  Two of the players from NZ’s Cal Ripken World Series team joined five other local players and Ambassador Mark Gilbert for a baseball training session in Auckland this week.

The seven players heard the Ambassador speak on lessons for both life and baseball, noting that the two go hand in hand.  During his professional career in baseball, the Ambassador learned the value of staying ready because you never know what curve balls life will throw—a tenet that has served him well in his current duties.  However valuable these words of wisdom, when a baseball player finds himself in a batting cage, a certain itch arises they have to scratch.  The Ambassador led the way by swinging a bat at a baseball for the first time in three years.  He was followed by an array of talented young players showcasing their skills.

Following the batting practice session, the Ambassador gave the boys authentic photograph cards from his days as a Chicago White Sox player, which he then autographed personally for each of them.

Ambassador Gilbert is always happy to work with Baseball New Zealand and The Fieldhouse to promote the sport of baseball in this generation and those to follow.

Alex Dunlap, the U.S. Consulate General’s 2016 Winter Fellow, wrote this article and coordinating this outreach activity. Alex is originally from The Woodlands, Texas where he played varsity baseball for four years. Alex’s high school baseball accomplishments include The Woodlands career records for hits, doubles and RBI, All-State honorable mention as a junior, Louisville Slugger All-American second team as a senior, named the 2013 Texas 5A State Championship All-Tournament team, and led The Woodlands to the Texas 5A State Championship in 2013. Alex is entering his senior year at Stanford University and is majoring in Science, Technology, and Society. He has had an excellent university baseball career too as a left fielder and catcher; as a Junior he was All-Pac-12, John Bench Award Watch List, and Academic All-Pac-12 honorable mention. The U.S. Consulate truly enjoyed having Alex these last couple of months and wish him well on all his future endeavors in baseball and his career.