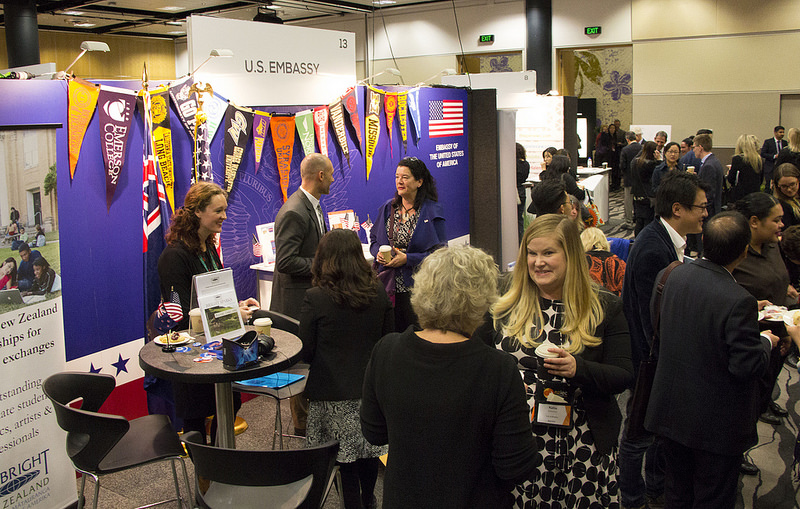 The New Zealand International Education Conference (NZIEC), hosted by Education New Zealand, was held at Sky City welcoming more than 700 guests over two days.  This year saw the United States recognized as the inaugural ‘Country of Honor’, reflecting the strong bilateral relationship between these nations’ education sectors.  The depth and breadth of opportunities was evident in the range of American speakers and presentations, reflecting the United States’ position as a preeminent destination for, and leader in, international education.

The U.S. Embassy and EducationUSA hosted the U.S. Lounge, which acted as a central location for connections to be fostered. Among the programs and initiatives highlighted on-site were; Generation Study Abroad, the Gilman Scholarship, and the Fulbright Program – all programs that foster shared educational experience and the collaboration of bright, inquisitive minds from both sides of the Pacific.  Bringing another piece of America to life at NZIEC, the U.S. Lounge also featured virtual reality headsets offering a glimpse of the campus experience offered at a range of intuitions in the United States.

Wrapping up the first day of NZIEC Ambassador Scott Brown gave remarks at the conference dinner. He spoke of his enthusiasm regarding the growing relationship between the United States and New Zealand in the realm of international education, its crucial role in deepening the relationship between these two countries, and the massive impact education and educators have.  His remarks noted:

And, equally important, we want to send our outstanding young American students to schools all over the world.

Because living and studying in a foreign country helps build leadership skills and adaptability that students need to succeed in a global world.

That’s why what you do is so important.  So for all the work you do, I want to say great going and keep going.