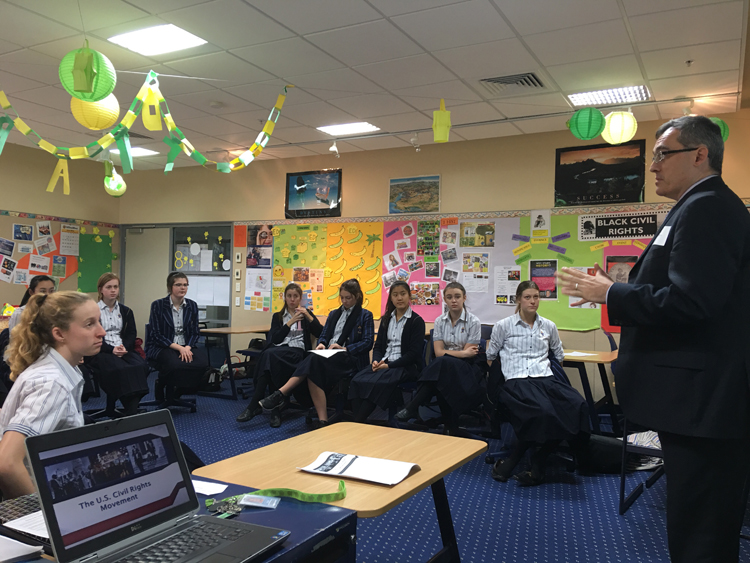 On June 16, 2016, diplomats Emily Armitage and Cavan Fabris spoke to Auckland High Schools about the American Civil Rights Movement. These presentations were a part of the American Insights Program which offers opportunities for schools to engage directly with U.S.diplomats.

The diplomats introduced the context for the African-American Civil Rights Movement by sharing America’s history of slavery throughout the 1600s and significant subsequent events, such as the Emancipation Proclamation of 1863. Critical aspects of the Civil Rights Movement were also discussed including the key Civil War-era 13th, 14th, and 15th Amendments to the U.S. Constitution (all designed to protect equality for newly-emancipated slaves), landmark court decisions (such as Plessy v. Ferguson and Brown v. Board of Education) and protests (such as the Montgomery Bus Boycott, The Little Rock 9, Freedom Riders, and the role of Dr. Martin Luther King).

Diplomats emphasized that the Civil Rights Movement is not stuck in the past, but instead that the movement and need to protect civil rights continues today in both the U.S. and New Zealand.  Diplomats enjoyed candid discussions with students on civil rights in relation to the LGBT community, domestic gun control issues, and the 2016 Presidential Elections.

The diplomats fielded thought-provoking questions from students including: What is happening in the U.S. regarding Native American civil rights? Is there another side not covered by mainstream news on Black Lives Matter? Why doesn’t America abolish gun rights in light of recent violent attacks? How did the Obama presidency affect American civil rights? Who do you think will win the 2016 Presidential Elections? And even, what do you think of New Zealand’s relationship with the U.S., given their historical differences on nuclear issues?

For details on how your school can request a U.S. diplomat presentation, please fill in and submit the American Insights Request form (pdf).