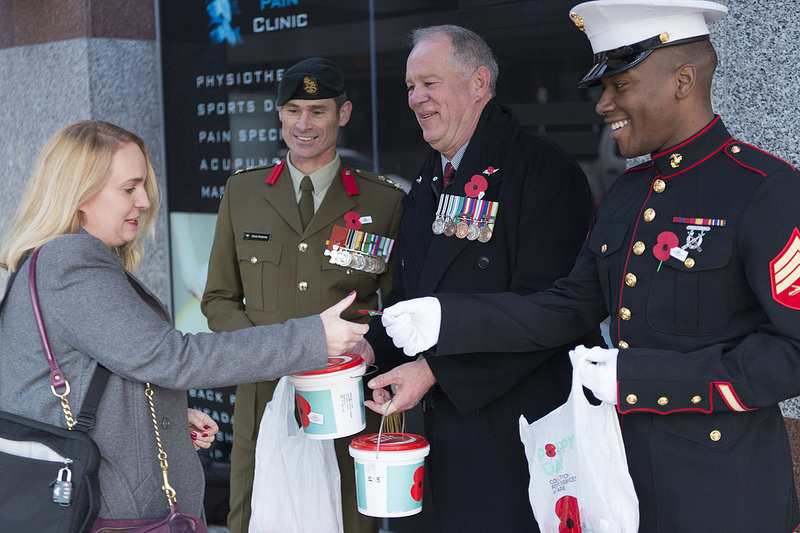 The United States Marine Corps stood side by side with the New Zealand Defence Force (NZDF) personnel and Royal New Zealand Returned and Services’ Association (RSA) in Wellington and Christchurch in the annual Poppy Day Appeal. This is the tenth year that U.S. Marines have assisted with the Poppy Day Appeal efforts in Wellington.  For the first time,  this year the Wellington-based Marines extended support to the appeal in Christchurch when Lieutenant Colonel John Black and Staff Sergeant Geoffrey Halterman flew there to support the RSA’s efforts.

Lt Col. John Black in The Bridge of Remembrance in Christchurch talking about the appeal and the US Marines’ involvement said “it’s our way of saying thank you, for doing what they do [to the NZDF and RSA]”, and “When you look at servicemen and women, they’re willing to give everything to their nation, so this is just a small way to say thank you to those who stood up.”

This year’s participation was especially poignant. 2017 marks the 75th year since the arrival of U.S. forces in New Zealand.  American troops stationed in New Zealand numbered from 15,000 and 45,000 between June 1942 and mid-1944.  Today, our close economic, cultural, and educational partnerships with New Zealand are built on this shared legacy.  U.S. and NZ defense forces continue to explore ways to work together in the areas of humanitarian assistance, disaster relief, and peacekeeping support operations.

The support of the U.S. Marines in the annual Poppy Day Appeal highlights the importance of the relationship between the two countries and our intertwined histories.  A yearly tradition with origins as far back as 1922, Anzac Day commemorated the soldiers that fought in the joint New Zealand and Australian regiments in a number of conflicts, first serving under the Anzac name; Australian and New Zealand Army Corps in the shores of Gallipoli fighting the Ottoman Empire in World War I. More recently, Anzac Day more broadly commemorates those who contributed, served and died in all wars, conflicts, and peacekeeping operations.

Staff Sergeant Halterman added, “Anzac Day is very similar to Memorial Day or Veterans Day [in the U.S.] so it hits us right in the heart and we really sympathize with the troops that were lost.”  Halterman described the Christchurch visit as “overwhelmingly positive.” According to the Staff Sergeant, “New Zealand as a whole has always been kind and courteous – the people here are wonderful.”

RSA’s Paul O’Connor, who has been involved in the appeal for the past 10 years, said that Christchurch was delighted to host the Marines.  He says the reaction to the visit was very positive and members of public were very generous with their contributions.