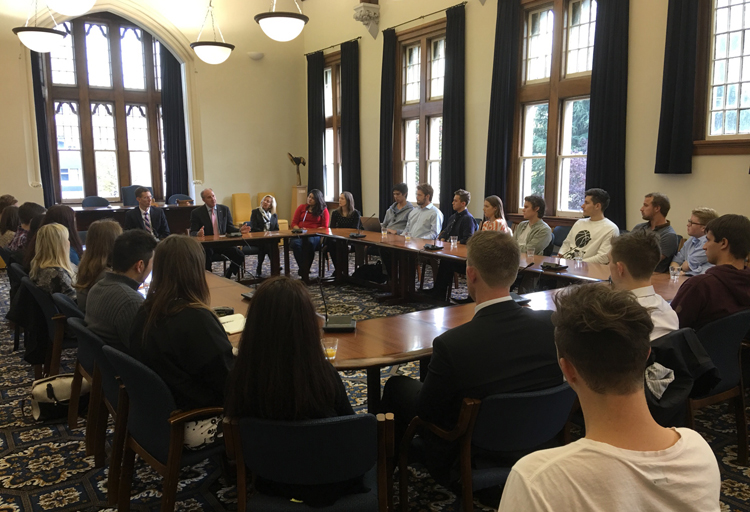 The groups elevate the role of youth in the diplomatic process. It provides New Zealand youth with an avenue to inform U.S. diplomacy efforts throughout the region. Equally, the groups provide members with an opportunity to learn more about international relations and the U.S. in general.

Over the last few months, Youth Council groups met for the first time in 2016 around the country. Members were introduced to the program, each other, and their first U.S. diplomats.

On April 13, 2016, the Dunedin Youth Council met U.S. Ambassador Mark Gilbert, his wife Nancy Gilbert and Politics/Economics Officer Craig Halbmaier. The group discussed the U.S. presidential elections and the implications for New Zealand. Specific issues discussed included how the U.S. election process works and how it compares to New Zealand’s parliamentary elections, the impact of the U.S. elections on TPP, and why party candidates take a position on TPP when running to be a candidate.

On May 9, 2016, the Christchurch Youth Council met Robert Tate, U.S. Diplomat and New Zealand Country Public Affairs Officer. Rob Tate presented them with their certificates and information about the U.S. Embassy. The kick-off ended with a getting to know you activity that gave the Youth Council and Embassy staff an opportunity to learn more about each other.

On May 11, 2016, the Wellington Youth Council met U.S. Ambassador Mark Gilbert, Politics/Economics Officer Michel Warren and Public Affairs Officer Rob Tate. The group spent time getting to know each other, the Ambassador, and other Embassy Staff.  Additionally they discussed the current American Elections, presidential as well as Senate, and their implications for New Zealand.

Follow #usnzyouthcouncil on social media for the latest news from our U.S.-New Zealand Youth Council program.

For more information on our Youth Outreach program, click here.