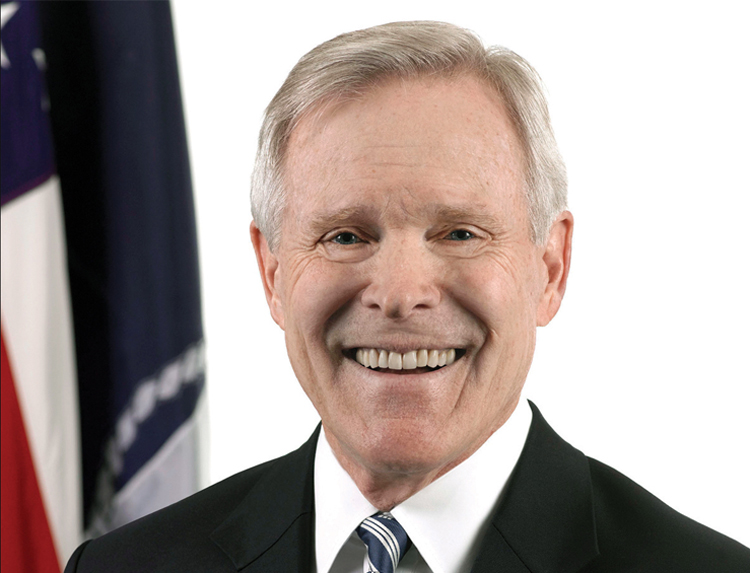 U.S. Secretary of the Navy (or SECNAV), Ray Mabu.

The U.S. Secretary of the Navy (or SECNAV), Ray Mabus, is visiting New Zealand this week to meet with New Zealand’s military leaders and officials on a wide range of issues.

In his time as Secretary of the Navy, Mabus has visited more than 140 countries and territories and all 50 U.S. states representing the U.S. Navy. This is his third visit to New Zealand during his tenure. He is coming to New Zealand as part of a routine regional itinerary, which sees him visiting four countries.

The Secretary plans to discuss a wide range of issues with officials in New Zealand. The Royal New Zealand Navy’s upcoming anniversary is likely to come up in broader discussions, however this is not the purpose of the Secretary’s visit.

“Yes, the United States has received an invitation to the Royal New Zealand Navy anniversary celebration planned for this coming November. No decision has been made yet and we do not have a timeframe on when a decision will be made,” says Secretary Mabus.  “Our bilateral military cooperation with New Zealand is strong, and we continue to partner in humanitarian assistance, disaster relief, and peacekeeping support operations.”

“In fact, our relationship with New Zealand, across the board, continues to grow, and we discuss and cooperate on a wide range of issues at the highest levels,” adds Mabus. Ray Mabus is the 75th United States Secretary of the Navy, the longest to serve as leader of the Navy and Marine Corps since World War I.

Responsible for an annual budget in excess of $170 billion and leadership of almost 900,000 people, Secretary Mabus has worked to improve the quality of life of Sailors, Marines, and their families; decrease the Department’s dependence on fossil fuels with a goal of relying on alternative sources for at least 50% of their energy by 2020; strengthen relationships with industry and internationally; and increase the size of the Navy fleet. He recently supported the implementation of gender integration in the U.S.  Military and the tripling of paid maternity leave, from six weeks to 18 weeks.

Before his appointment by President Obama, Mabus held a variety of leadership positions. From 1988 to 1992, Mabus served as Governor of Mississippi, the youngest elected to that office in more than 150 years. Mabus was Ambassador to the Kingdom of Saudi Arabia from 1994-1996, and later was Chairman and CEO of a manufacturing company, which he led out of bankruptcy.

Mabus has been recognized for his leadership of the Navy and Marine Corps on multiple occasions.  In 2013, he was named one of the top 50 highest rated CEOs by Glassdoor, an online jobs and career community.  Mabus was the only person in government to receive this award.