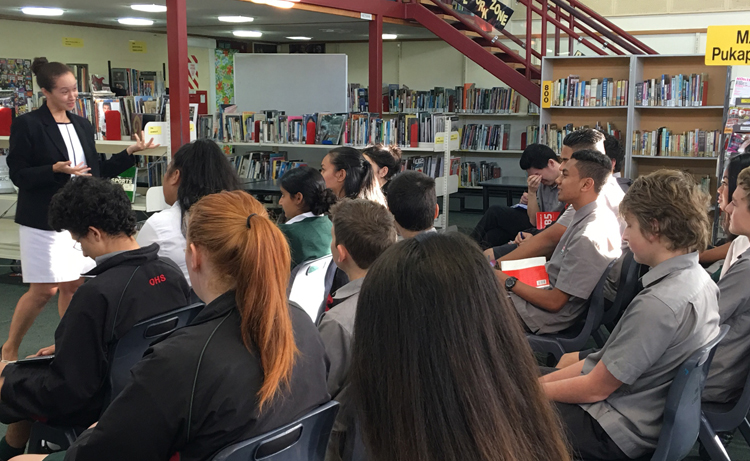 The last three months were action-packed with opportunities for U.S. Diplomats to reach out to youth in Auckland and Wellington high schools. Upon request from New Zealand high schools, U.S. Diplomats presented U.S. history topics through the American Insights Program.

On March 22, 2016 Public Affairs Officer Rob Tate was invited to share his insights on the global roots of American music to a group of 25 Wellington College students, their parents, and teachers. The group of students and teachers will soon embark on a journey to the U.S., specifically Los Angeles and New York. Rob’s presentation and insights from an American perspective offered relevant insights for students and provided a context and background for their trip.

On April 6, 2016 Year 13 Media Studies teacher at St Catherine’s College in Kilbirnie requested an American Insights speaker from the U.S. Embassy to speak to her students on the topic of dystopian sci-fi (and its development from 1970s-2010s). The students have been studying this film genre and one of their learning aims is to understand the context into which films of this genre (e.g., Soylent Green, Blade Runner, Children of Men, and The Hunger Games) were produced. LtCol John Black (SCO Chief) represented the U.S. Embassy, shared insights on the political context in the US during each decade, and entertained questions from the students.

On May 9, 2016 Diplomat Megan Salmon presented and discussed the important topic of U.S. Civil Rights. Salmon focused particularly on the role of African American women throughout the Civil Rights Movement from the 1960s until present. Salmon enjoyed engaging Onehunga High School history students in an honest two-way discussion on their views of Malcolm X, Martin Luther King and Rosa Parks.

On May 13, 2016 Sergeant Jay Rusniak spoke to students at Rongotai College on the American Elections. Sgt. Rusniak gave an overview of how state primaries help parties chose their nominees for presidency. Additionally he spoke about the upcoming Senate elections and the role of the Electoral College. He also skillfully answered questions from the students who were very interested to hear about the current election.

On May 16, 2016 Diplomat Conor Dickinson introduced Pakuranga College students to America’s role in World War I. Dickinson led a critical discussion on the ideas of isolationism, international security and U.S. foreign policy. Many of these concepts resonate with the role of the U.S. in international affairs today. The students appreciated the American perspective Dickinson offered.

On May 19, 2016 Economics Officer Andy Covington spoke to students at St Patrick’s college on the American Elections. He gave the students an overview of the electoral process and the events of the current election. The students were grateful for the opportunity to hear about the American electoral system and the session finished with a lively Q and A.

In the coming month Foreign Service Officer Scott Ceier will be speaking at Onslow College on the topic of American Literature.

For details on how your school can request a U.S. Diplomat presentation, please fill in and submit the American Insights Request form (pdf).