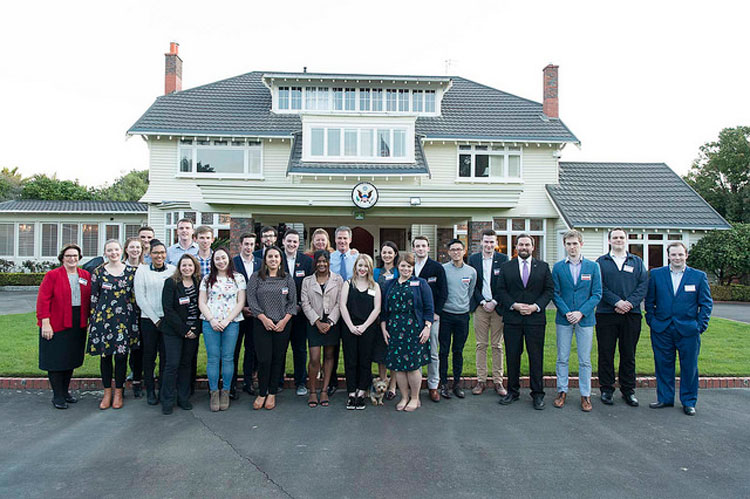 With the new Ambassador settling into his role at the Embassy there’s been a flurry of activity for the U.S. NZ- Youth Council.

At the start of September there was a career development morning where the Youth Councilors heard from New Zealand alumni of State Department programs and embassy guests. I had the great privilege of being part of a panel on Communication for Career Development. My fellow panel members included Bart Evans from the New Zealand Police, Colin Kennedy head of the New Zealand Enterprise Scheme and the Embassy’s own Counselor for Political and Economic Affairs Demian Smith. Needless to say I learnt just as much as the Councilors from being able to hear such an esteemed panel speak. The most interesting piece of advice that came out to me was the idea of how important it is to make an effort to connect with your co-workers. During your career you will spend so much time working with people and the more collaboratively and genuinely you can do that the more successful you will be as an individual and as part of a larger team.

In September, Wellington Youth Councilors had the opportunity to meet Ambassador Scott Brown his wife Gale at the diplomatic residence. It was a great opportunity to get to know the Ambassador better and hear about his journey from army to the Senate to now an Ambassador to the other side of the world. Furthermore it was a great opportunity to meet diplodog Gracie who wasted no time jumping up onto the first lap she could reach to better join in on the conversation. The Ambassador answered questions from the Youth Councilors including some top tips for those interested in running for Office one day.

These experiences are so important for strengthening cultural ties between our countries and broadening the horizon of Youth Council members.