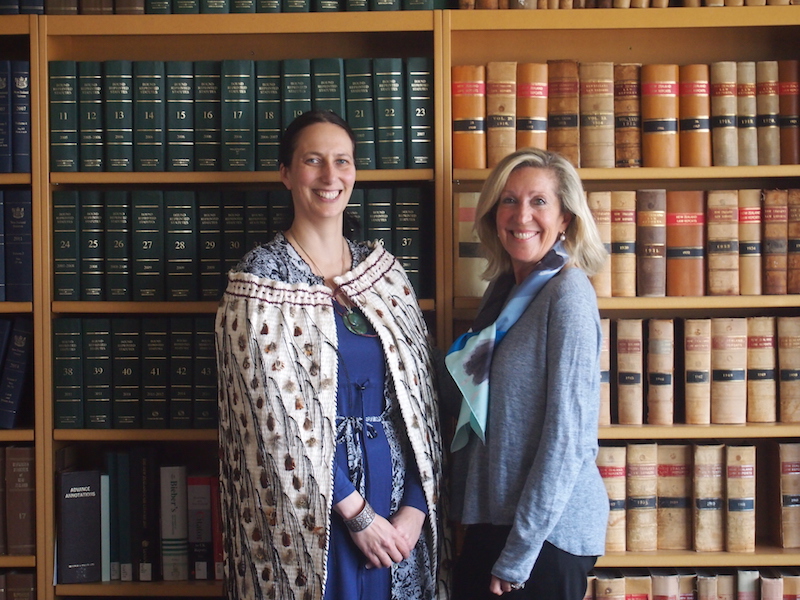 Jacinta Ruru is New Zealand’s first Māori Professor of Law, co-director of Ngā Pae o te Maramatanga (New Zealand’s Māori Centre of Research Excellence), and a two-time Fulbright award grantee. Jacinta’s utmost mission has been straightforward: to bring a strong Indigenous voice to the law. A voice, she says, that will change society.

The quietly charismatic academic of Raukawa, Ngāti Ranginui, Ngāti Maniapoto and Pakeha descent, is the final Wahine Toa in our two-year project.

I sat down with Jacinta in her Faculty of Law Office at the University of Otago in Dunedin, surrounded by books and numerous research publications. She explains that academic publications contribute towards “pushing the boundaries and possibilities of law and society.”

Jacinta explains the important role of a legal academic is “to serve as a critic and a conscience in order to affect change beyond that of a lawyer in a courtroom or within the structured confines of a firm.” She is celebrated as the first professor of law of Māori descent, as one of the first of two Māori women to be elected as fellows to the Royal Society of New Zealand, and winner of the Ako Aotearoa Prime Minister’s supreme award for tertiary teaching with the associated prize to be the kaitiaki (guardian) of the most beautiful korowai cloak that she wore for photos the day we spent together.

Her story begins with her “aha moment” in year 11 (tenth grade/5th form) when,  at her Central Otago school, she read a short story by Māori author Witi Ihimaera about a Māori family and racism. “It captured my attention. It was the first time we had read a Māori story in a class and spoke about real issues in our country.” She began to sharpen her senses and became increasingly aware of the absence of Māori language, values and authority including in the national parks she often hiked with her family.

As an aspiring law student, Jacinta became aware of the injustice in law and continuing effect of certain 1870s court decisions that referred to Māori as “uncivilized” and “barbarians.” “There has been an appalling hostility of law towards Indigenous culture. Māori have always sought to change state laws but real successful action is relatively new, something that began after the 1960s when Parliament and the courts began to listen,” she continued.

The need to make a change for Māori in the law, textbook language, and law school curriculum infected Jacinta.  With the generous support from the University of Otago,  Jacinta began her academic career with  an opportunity to spend time with other  Māori law academics around the country and has ever since worked towards contributing to calling for a more respectful voice in the legal system for Māori.

Jacinta pursued postgraduate research on the National Park System in New Zealand and in Canada and lead research with colleagues locally, nationally and globally including in the United States. “New Zealand, like any colonial nation, inherited a colonial legal system. Those systems were designed to deny Indigenous peoples’ rights in their own land. We have to be brave and to think deeply for solutions.” Jacinta’s research seeks new legislation and legal rules for how and why we value lands and waters.  “The land is a place for Māori and Pākehā but the official legal language of the parks did not completely reflect that. The law needs to change to recognize the importance of these lands for tangata whenua too”.

Valuing Māori culture, rights and interests in the law is positively impacting the focus of the law school. “We have seen an increase in Pākehā who want to learn about Māori legal issues. Our Māori students are thriving.  On campus we are creating social justice leaders, valuing the diffehhhrent narratives that Māori students bring to the University and to the Law School.  We teach that studying the law comes with a responsibility when they assume leadership in their workplace, whānau, hapū or iwi,” she says with pride.

The timing of Jacinta’s arrival on the legal scene coincided with modern treaty negotiation controversies. She and others searched for solutions including in co-management and how the ‘crazy idea’ to give legal rights to nature might work as a solution to contentious ownership issues in New Zealand.

Resolutions that she only dreamed of are becoming real in New Zealand.  The legal personality notion has really resonated with Maori tribes and the Government.  “It’s the idea that holds that a land or river should have its own legal standing, be its own person, and this is an idea that correlates with the Maori worldview that some of our lands and waters are our ancestors”.  Two tribes have developed the ideas and successfully negotiated settlements with the Government. “It was a solution, and it is capturing the imagination of the world heightened by coverage in the New York Times no less,” she explained. This fascinating concept which gives ‘voice’ to Te Urewera in the North Island and the Whanganui River, gives a legal personality as a vehicle for recognizing Indigenous people’s rights due to their ancient relationships with nature.”

Jacinta Ruru sweeps along her life story and I’m hanging onto every extraordinary word. Jacinta remains optimistic saying “hopefully through the treaty settlement negotiations, greater New Zealand will learn, see, and experience solutions to make our country greater as a whole.”

We had one obvious question to conclude our interview “What’s next for this married, mother of two, and leader of legal education in New Zealand? A political future for Jacinta Ruru, perhaps?”

We were met by silence, a pause, and a big smile.