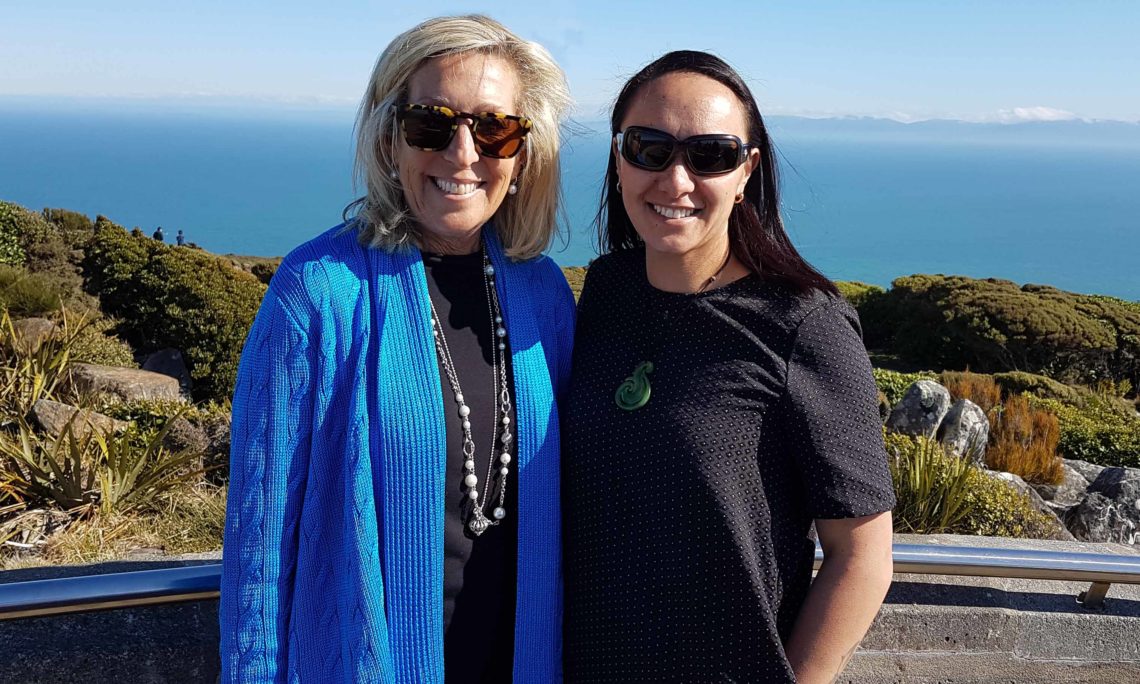 The latest Wahine Toa post by By Nancy Gilbert, wife of U.S. Ambassador Mark Gilbert.
For the next Wahine Toa blog I traveled to the world’s southernmost marae which is at the bottom of the South Island in Bluff. I met Aimee Kaio, a dedicated social entrepreneur from Ngāi Tahu,
Tuhourangi, Ngāti Whakaue and Ngā Puhi, whose personal story reflects a long line of female heroism and empowerment – and women who are community problem solvers.

From the road, the distinctive gateway of Te Rau Aroha Marae draws us inside. Designed by creator of Te Papa Museum Marae, Cliff Whiting, Māori myths and legends, and female tupuna are celebrated in magnificently vibrant carvings. “Our women overcame obstacles and hardship. Our women married whalers and sealers and established a thriving community here in Bluff where there has always been a strong female line. Women leaders loom large in Bluff,” Aimee begins.

An ordinary looking house on the marae holds extraordinary history to her whānau. “My mother grew up in that house. It became known as the ‘Māori house’ for opening its doors to pan-tribal meetings and live music. One day my Aunty returned home to Bluff from Rotorua and decided we needed to build a marae on this land. I remember my mother baking hundreds of sponges and pavlovas and my Aunties catering to fundraise for our marae. The foundation our Aunties and Uncles have created for us is such a blessing,” she smiles.

Aimee’s personal journey was influenced by the untimely loss of her mother to cancer. She majored in biochemistry to pursue cancer research, but limited research opportunities in Southland and the birth of her first child in 2000 triggered a directional change to the social and health services sector.

“I started as a Government servant distributing student allowance payments. I was pulled into whānau survival stories and learned the issues people were facing. I became frustrated with perfunctory systems that didn’t affect patterns of poverty. I felt I needed to supplement food grants to help whānau survive, then quit before they fired me,” she laughs.

Disturbed by the poverty in her community, in 2002 she, along with a close friend, and supported by her Marae whānau, launched Awarua Research and Development. For their first tranche of projects they partnered with the government in an effort to explain science in proposed housing policy to the community. “Our input morphed into policy making. This opened my eyes into how and why things happen and the connection of the government to social policy. This experience is relevant to where I am today.”

In 2003 Aimee’s next research study and first enterprise contributed significantly to an unprecedented national government policy for home insulation with the ‘Bluff Healthy Homes Project’. Awarua R&D assessed and retrofitted Bluff houses and zeroed-in on the causes of poor health. Poor living conditions, damp housing and lack of insulation heralded the onslaught of sickness and low rates of success in schools. Her recommended five year plan would be funded in part by central government, local private partnerships and philanthropists. People paid what they could for a retrofit based on their income. This initiative then became a successful  energy solution provider, Awarua Synergy.

“I’m extremely proud that our team insulated 800 homes. A before and after study found a dramatic change in children of the retrofitted homes. They improved in school, increased school attendance, fewer doctor visits, and stronger engagement in society at large,” she continued. She connects this extraordinary accomplishment with the foundation she received at home from a family that always made ‘home’ the center and pulse for their entire whānau and community.

With Awarua Synergy in full swing, and caring for her three children, she then turned her energy into developing her own consultancy. Awarua Synergy was left in the safe hands of co-developer and Manager Sumaria, and also to her husband Jason, a former professional rugby player, as she turned to working on a new community development endeavor.

She forged international indigenous relationships through Te Rūnanga o Ngāi Tahu First Nation’s Futures Program – a collaboration with Stanford University, Kamehameha Schools, and Ngāi Tahu. “Participants from Hawaiian Kamehameha schools, and Native American communities attended the intense and transformative program on food sovereignty and tribal economies. We have since hosted our Hawaii cousins here in Bluff, and visited them on many occasions.” The program made a lasting impression, igniting a passion for Tribal Economies and inspiring Aimee to launch her private consultancy.

She currently runs her own consultancy, NORA, named for her late mother, specializing in social enterprise and entrepreneurship areas. One project that makes Aimee most proud was the establishment of the ‘1000 Days Trust’, a residential model for whānau with newborns to ensure positive relational health is established and normalized. This respite whare (house) offers early intervention and services to help each family member identify problem areas, and to then support positive whānau transformation.”

“It is completely whānau-led. We can be working with one family member on making nutritious meals while concurrently bringing in experts for other family members to promote positive connections, infant mental health awareness, and general well-being.” The University of Otago is studying the house project to better understand family transformation points.

All of this work for others has been followed with great pride by one of Aimee’s ancestral tribes, Te Rūnanga o Ngāi Tahu, which has brought Aimee into the fold. She recently became Program Manager for the newly formed Tribal Economies department. “Our role is to support iwi members to realize their dreams through wide ranging support mechanisms like idea grants and business mentors.”

At our Wahine Toa Leadership Conference in October 2016, the U.S. Embassy awarded Aimee the Wahine Toa Travel Award. The award recognizes the positive impact she has had in Southland. It will allow
her to network with Native American leaders through economic, cultural, and educational exchange, and develop ideas to further engage the Southland community upon returning home. The strength, creativity and vision which created the world’s southernmost marae, are qualities that are in this biochemist-turned social entrepreneur, wife and mother of four. No doubt we will continue to hear great things from our Wahine Toa,  Aimee Kaio.