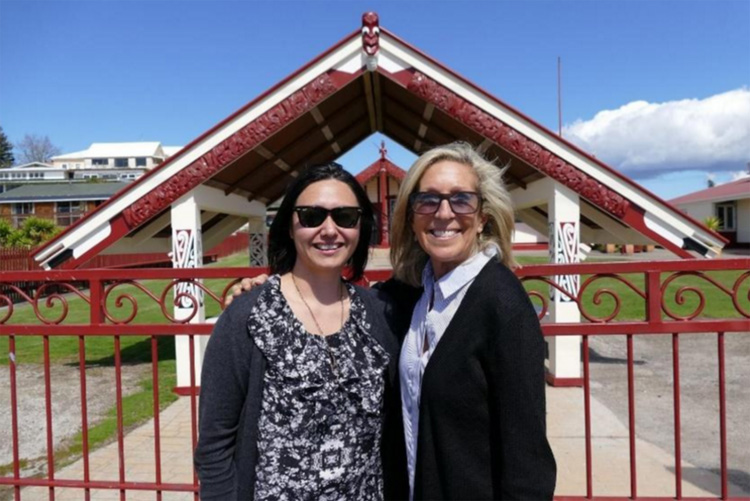 Rotorua has been a thriving macrocosm of Māori tourism since 1877 when local hapū, Ngāti Whakaue of the Arawa iwi, gifted the downtown area to the Crown to develop for the people of Rotorua. Central to the township is Ohinemutu Māori village, the papa kāinga (multi-generational settlement) of Ngāti Whakaue members. It was there I met our next Wahine Toa, Ana Morrison. She is the first female Chairperson of a Ngāti Whakaue commercial entity and one of the few young female Chairs of iwi post-settlement entities nationally. During our fascinating discussion, Ana shared events in her life that helped shape her passion to transform Aotearoa through harnessing the financial value and social impact of iwi organizations.

Ana moved to Rotorua at seven when her father, Monty, was called home after her grandmother sadly passed away. Her whānau moved to a culturally connected lifestyle that involved her father’s participation in tribal activities, kapa haka, Rotorua community activities and becoming a Te Reo Māori teacher.  This change “formed my social awareness and continually fed my cultural identity” she says. “Mum kept the home fires burning and pushed me and my siblings on the academic side.” Her parents cashed in their pension so she could attend the prestigious St. Paul’s Collegiate private school. “We were lucky children to have such strong and loving parents”. It was here she discovered a talent for working with words to help people.

While studying to become a doctor, Ana discovered the best way to affect change is through public policy and law. Ana completed degrees in Law and Biological Sciences, and won a prestigious government scholarship for Māori women leaders. Her early law career exposed her to landmark cases that set precedents for contemporary Treaty of Waitangi claims and that drew significant public interest, like the Foreshore and Seabed claim. “I absorbed a lot watching my mentor Martin Dawson work and how he dedicated his career and worked tirelessly to ensuring injustices were rectified”.

During her Overseas Experience (OE) in London she juggled working in a firm on Fleet Street with involvement in the Ngāti Ranana London Māori Club. “I felt immensely proud to represent Māori and New Zealand on the global stage. The sense of community was fulfilling and instilled a great energy and focus for my return to New Zealand.”

Ana has created a world where career and motherhood coexist. “There aren’t enough hours in the day, and I needed to create balance to ensure my whānau took priority”. Weekday mornings she works at a holistic health care center, ‘Tipu Ora’ in Ohinemutu, that provides free health care for babies and health and social care for moms.  Early afternoons are divided between her governance work for Ngāti Whakaue Assets Trust and Pukeroa Oruawhata Lakefront Holdings (the tourism arm of one of the ten largest Māori organisations), and her work in programs at her husband’s marae. Late afternoons and early evenings are solely focused on caring for her own two sons, aged five and seven. Emails and other work don’t get a look in until the kids are in bed.

Recognizing the benefits of gender diversity, Ana is leading the way for diversity in tribal entity governance. As the first Māori woman and youngest Chair of a Te Arawa post-settlement commercial entity, Ngāti Whakaue Assets Trust, she is proud of the gender equity on her board and considers this a competitive advantage. One of Ana’s goals is to encourage other iwi to strive for gender equity in governance.

The Trust  developed from strength to strength and grew 23 percent during her three year chairmanship, and distributed over $1 million in grants that included home insulation, major building and marae refurbishment projects, and collaboration with five other hapū organizations for a celebratory festival. The festival convenes over 2,000 members of all ages for a series of programs including an event to develop the network of future leaders, a banquet to honor success and a kapa haka expo aimed to bring the community back to the marae. This hugely successful event will occur every two years, and in the other years her board created different events (such as a mountain bike tour) to re-connect iwi members as kaitiaki (guardians) with their natural resources and communities.

Her most recent achievement her board membership on the newly founded Te Tatau o Te Arawa – a progressive partnership between Te Arawa and the Rotorua Lakes Council that has been described by legal commentators  as ‘the Treaty of Waitangi in action’. Te Arawa proposed this development to strengthen Te Arawa’s participation in Rotorua District Council’s strategic planning. The model was officially adopted on 18 December 2015 and Ana has been appointed to the Council’s Strategy, Policy and Finance Committee.

In closing, Ana said “I am passionate about Aotearoa. I see my role as a young Māori woman leader is to contribute to an economically and socially prosperous society. I can use my skills to improve outcomes for my iwi and this contributes to a stronger community and country.   I believe that if Māori succeed then that is good for everyone”.