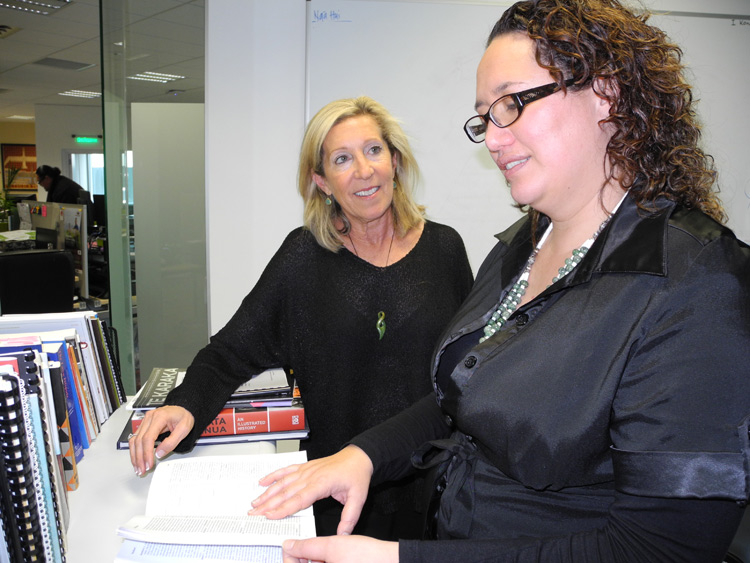 Reviewing some of Charisma’s work in her office. (photo credit: U.S. State Department).

I continued my Wahine Toa journey south to the city of Christchurch, which is the base of New Zealand’s wealthiest tribe, Ngāi Tahu. At their impressive new headquarters I met Charisma Rangipunga, who, like so many Māori women I have come across, is talented on many levels. Author, composer, mother, and Māori language champion, she casts a positive light on her iwi and whānau.

Raised in Australia, this dynamic young woman of Ngāi Tahu, Taranaki and Ngāti Kahungunu heritage returned to New Zealand at age 11, with her mother, Linda. Education was central to her upbringing and her mother sent her to St Joseph’s Māori Girls College to learn Māori language and customs. This coincided with her mother’s own personal journey of cultural repatriation. As a single mother, Linda worked 5 to7 jobs to ensure that her children attended good schools so they “would achieve success and success as Māori”.

It was at St Joseph’s that a strong and unforgettable figure, Miss Kingi, “forced me into situations out of my comfort zone. After years of rejecting my mother’s soft approach to learning te reo Māori, Miss Kingi’s no non-sense approach led me to accept the way of the school”. While completing her last year of high school in a mainstream school she came to appreciate her St Joseph’s education. Thrust into leadership roles, she started teaching the other students te reo Māori and kapa haka. “I realized te reo Māori is mine and I have a responsibility to our tūpuna (ancestors) legacy to create an enduring language strategy”.

Today she is General Manager of ‘Te Taumatua’ at Te Rūnanga o Ngāi Tahu, managing a team of twenty four, in language, culture, archives, heritage, arts and genealogy. The economic success of Ngāi Tahu makes it possible to launch language learning campaigns. Each year her team submits a budget and business plan for language programs which cater to iwi members. She says “it is humbling because some adults have been without te reo for five generations. The previous generation was busy working on justice and governance for the iwi at the risk of their own cultural development. So, it is now up to our generation to reciprocate and pay their investment forward. We will do that by creating a world where Māori can stand proud as Māori”.

Charisma’s team encourages the use of te reo Māori from one generation to the next. She mastered the formal language but is most proud of developing colloquial words and phrases for parents to use during everyday conversations with their children. Her language revitalization effort has a powerful grace which conveys “if you’re not speaking te reo at home the language is always in peril”. Charisma’s flagship program is an annual stay on a marae where whānau speak Māori during a mix of games and fun interactions, which helps normalize the language for parents and children.

Charisma was recently appointed a Commissioner at Te Taura Whiri (Māori Language Commission) and she has been involved in reviewing the Māori Language Act. In this role, she hopes to ensure the Act is contributing positively to Māori Language regeneration.

Charima is a published writer and co-author of twenty adult and children’s books including: ‘Kupu’, an anthology of Māori poetry; ‘Kura Kaumatua; and He Hokika Mahara: Recalling the Memories’, a collection of memoirs honoring Canterbury kaumatua. Her other hidden talents include song composition creating works for her tribe in both contemporary and traditional styles. When Charisma and husband Lewis aren’t busy with their three sons, one of her favorite past times is filling in as backseat kapa haka judges.

Preserving a language is vital to preserving a culture. This belief is the driving force behind Charisma’s success. She is an intellectual power who has dedicated her career to revitalizing the Māori language and spreading its daily use amongst Māori people. This is no small feat, but Charisma has dedicated her life’s work to this cause and it may be no coincidence that she exhibits a passion that affirms her very name.