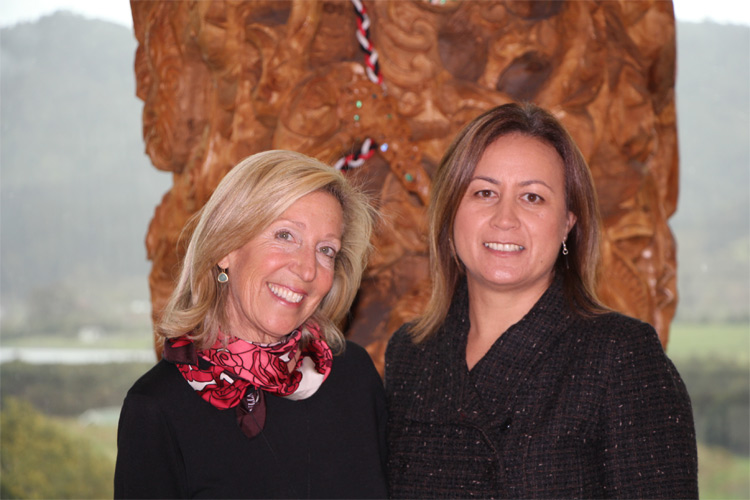 With Sarah-Jane next to Tawhaki. Photo credit: Waikato-Tainui College.

As part of our now well established Wahine Toa series, I traveled to “King country”, home to the Waikato-Tainui iwi and a dear friend, King Tuheitia Paki. Pioneers of Kingitanga, (a collective spirit to unify Māori tribes under a Māori monarchy) the iwi holds an incredible amount of reverence from its proud history and longstanding traditions. At the very heart of its tribal area lays the Waikato-Tainui College for Research and Development under the stewardship of Dr. Sarah-Jane Tiakiwai. Sarah-Jane has become ubiquitous in the educational landscape and is creating opportunities for iwi members.

I met Sarah-Jane at the College’s campus in Hopuhopu to learn about its vision and visionaries and the tribe’s emphasis on education and leadership training. At first glance, the College looks very modern and offers people skills to succeed in the future. I soon discovered inside how its spacious interior and methodology incorporates traditional elements as well, with floor to ceiling carvings weaving in Kingitanga symbolism, and Māori myth and legends.

2015 marks a significant year for the tribe and for Sarah-Jane. She celebrates five years serving as the college’s Academic Director, and it has been 20 years since the Waikato Raupatu settlement was signed. She oversees thirty staff in operations, research and programs on campus. “Our programs center around developing leadership in the areas of research, governance, strategic business and management and our language and culture,” Sarah told me. The college enjoys royal patronage from the current Māori monarch, King Tuheitia. It is modeled after the Oxford (British) Residential College setting, where living and education blend as one lifestyle. A modern manifestation of traditional houses of learning, Matauranga Māori (Māori Knowledge) and Heritage underpin much of the work, and modern tools of the educational workplace are utilized.

At the outset of her career, Sarah-Jane planted her feet firmly in the world of indigenous education that she now shapes. After completing a Masters of Māori Studies and having her second daughter, she learned a great deal working part-time for her mentor, Sir Robert Mahuta, who was instrumental in the historic 1995 Waikato Raupatu Settlement.

Waikato Raupatu was the first of the modern Māori settlements. “An endowed policy was created to enhance our future leaders’ spiritual and cultural connectivity, and empower them to advance our people” she explained. Five years later the endowment would establish a unique research and development college for its time.

Sir Robert tapped Sarah-Jane to apply for the first doctoral scholarship offered by the tribe. She fondly recalls his crucial early support and influence. Sarah-Jane was successful, with a tribal focused thesis titled ‘Māori Participation in Higher Education’. A subject that paralleled her own experience at university, she examined the experiences of Māori students, and interviewed the tribal board and local university on its tertiary initiatives. She was the first to be awarded the Maori Academic Excellence Award for her thesis in the Social Sciences category.

Sir Robert and the Māori Queen, Dame Te Atairangikahu, opened Waikato-Tainui College in 2000. Two years later, Sarah-Jane graduated with her PhD in Maori Studies from the University of Waikato. One unsung hero Sarah-Jane points out is Sir Robert’s wife, Lady Raiha. She carried on her late husband’s work and obtained the endowment for the college to become fully functional in 2008 through the Waikato River Settlement. Sarah-Jane emotionally recalls, “the day I was to sign my contract as Academic Director in 2010, was the day Lady Raiha passed away”.

Sarah-Jane moderates a panel “Reflecting on 20 years of settlement”

Since opening its doors in 2000, international academics, Prime Ministers, and dignitaries from around the world have visited the college. College graduates have moved into a range of employment across sectors including Senior Adviser to Ministers of Parliament, Deputy Chief Executive of a tertiary institution, General Managers of Maori organizations and tribal advisers. Sarah-Jane instituted a program with Professor. Stephen Cornell, from the University of Arizona and one of the founders of the Harvard American Indian Economic Development Project, to share best practices for indigenous governance, economic development and social wellbeing. She actively promotes the college and its research through workshops and as a guest keynote at a variety of events including most recently the Māori and Pasifika Suicide Prevention symposium. Each year the college holds an annual Raupatu Memorial dinner commemorating those who have and continue to contribute to the college.

“The monumental financial settlements were just the start for us. We are working hard on how to make these settlements durable for future generations. Each generation has to stop and think, what contribution will we make and leave for those who follow. It is a need for layering. We have to be responsive to the times, while connecting to the great traditions of our past”. She closed the interview with a realization that Waikato-Tainui College has now reached the place envisioned 15 years earlier.