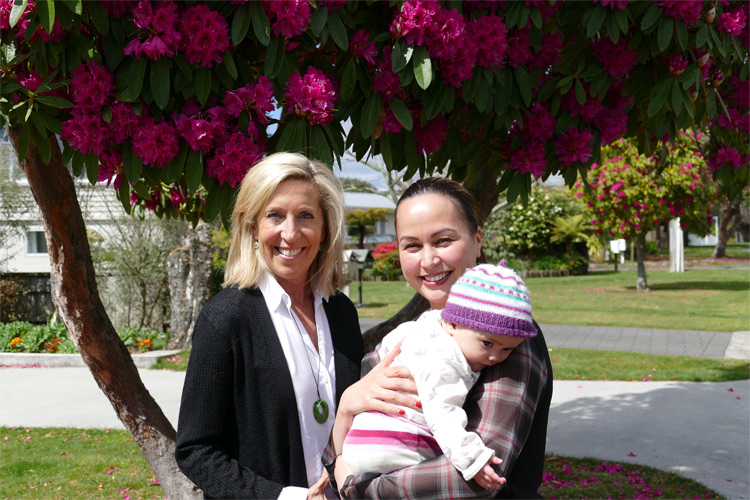 This month I’d like to introduce Gina Rangi of the Ngāti Tūwharetoa and Ngāti Raukawa iwi. Everything about Gina – her intellectual pursuit, ambition to create positive outcomes for Māori, and social life – is based on the premise that leadership is about service. When I met her, I learned how this Private Consultant, Treaty of Waitangi settlement negotiator, and Trustee has made a difference through her unwavering commitment to serving her community.

On a quiet street lined with pink rhododendron trees, the cool, calm, confident mother of three gracefully balanced her six-month-old daughter, while preparing lunch in her family home. Her earliest memory of leadership training started at her Marae when her parents directed her to the kitchen to dry the dishes while the other children were at play. She says, “The experience was invaluable because the kitchen is where all great conversations and laughter takes place”. Surrounded by her wider family, the kitchen talk garnered community engagement and Māori kawa (protocols) and tikanga (rules) essential to today’s volunteer work at her second home, Mokai Marae.

A self-described bookworm, Gina was always at the top of her class in every academic arena. Elected by her peers as student representative on the board of trustees at Queen Victoria School for Māori girls, she acquired a political skill set in a field of adults. In her final schooling year, she merged into the newly co-ed Hato Petera College. It was there she met her husband, Manu, now an arts teacher and equally attentive father. She was the first young woman to win the coveted Dux title (Latin for leader) for being first in her class academically. As an aspiring young leader she was “blown away” when the media publicity prompted school alumnus, Willie Te Aho, and then Chief Executive, to write her a congratulatory letter. This serendipitous act would lead to a summer law job during university when Willie became her Māori development lecturer.

Gina’s summer work provided a gateway to both her professional and iwi work. Her first project with Willie involved working on a river dam mitigation package between Ngāti Raukawa and an electric company. She traveled for the first time to all 16 Ngāti Raukawa marae, consulting tribal members on the impact of river dams on traditional cultural practices and ecology. “I learned to record for a purpose, knowing you held the key on how and what message was conveyed”. She was eventually offered a summer job at the Russell McVeagh law firm that led to a full-time position in the Māori Practice team assisting in environmental law and in post-Waitangi settlement structure.

At the same time, she made a seamless transition from young leader to trustee. Gina’s uncle, Brian Jones, a positive role model and one of the founding members of Tuaropaki Trust, invited her to become an Associate-trustee as part of their succession strategy. The trust manages the pastoral farming, dairy processing, viticulture, telecommunications, horticulture and geothermal power generation interests on behalf of 2,000 shareholders from seven hapū.

The Trust’s ascent to prosperity is stunning, growing from $2 million in the 1980s to $600 million in assets today; and is the largest Māori land owner by dollar value. The land sits on the Mokai geothermal field that has enabled the trust to build and operate a 105mW power station. Revenue from the generator has enabled the trust to return an annual dividend to shareholders, provide kaumatua and education grants, and targeted scholarships in science, business and Māori studies to support their business ventures. By Gina’s third Annual General Meeting, she was the youngest Māori female appointed a lifetime trustee.

In addition to her private consultancy, Koi Consulting Ltd, Gina is currently managing Ngāti Tūwharetoa Treaty of Waitangi settlement negotiations with the Crown. The work Gina and the tribe did over the last five years led to a significant milestone: the signing of an Agreement in Principle. In the near future, she hopes that claims relating to Tongariro National Park will be resolved. She said, “We are working to ensure the original intention of our ancestors, that the sacred land of these mountains is managed in a culturally appropriate way”. This would include developing new ownership and management models between the Department of Conservation and Ngāti Tūwharetoa to enrich the ecological and cultural environment. The iwi is training members to become DOC rangers.

Outstanding communicator and enthusiastic motivator, Gina’s leadership protects strong legacies at home, and in the tribe and workplace.