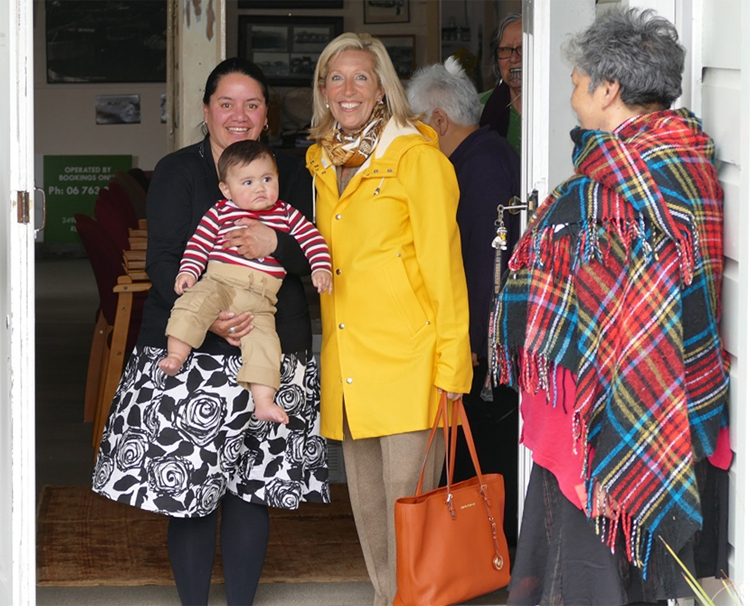 Wherever you may travel in the Taranaki region, you stand in awe of the stunning Mount Taranaki that unites the eight surrounding iwi through history and lore.  In Māori legend, Taranaki migrated from Taupo after losing a battle with Tongariro over the beautiful Pihanga. To Taranaki’s west is the historic Parihaka settlement where our next Wahine Toa, Liana Poutu, radiates a sense of time and place connecting her daily work to this important piece of Māori history.

Liana’s career has gravitated to the Taranaki region, where she has genealogical links (whakapapa) to the Taranaki and Te Atiawa iwi. With Liana by my side, I received a heartfelt powhiri from her relatives in Parihaka. Meeting her wider whānau was a step closer to understanding how Liana has become the embodiment of women’s empowerment. She is one of few Māori women leaders in Treaty of Waitangi settlement negotiations and post-settlement governance. “I come from the necessary but proud Parihaka tradition where women had to take up male roles when our men were imprisoned without trial after the 1881 event. Our whānau has a high consciousness about this history, and it is part of who I am.”

Liana got off to a promising start raised under the guidance of her grandparents, Val and Ted Tamati at Muru Raupatu marae. Her grandfather was emphatic that education be the center of her and her sister’s lives, and from New Plymouth Girls High School she was a girl on the rise. “At primary school it was predicted that I’d be ‘head girl’ in high school, and I was.” She emerged as the first in her family to attend university, completing a double major in a Bachelor of Arts Māori and Bachelor of Laws from the University of Waikato. “I learned the most about myself when I left Taranaki having met students from other iwi. We shared goals and formed life-long friendships that would later become intrinsic to my Māori development work.”

Liana spent her time in the legal profession working on significant Māori land and Treaty of Waitangi issues including Te Tau Ihu (Top of the South Island), Wai 262 Flora and Fauna, National Park and Whanganui Inquiries.  After spending several years working for other iwi across New Zealand, the desire to return home to Taranaki was always in the back of her mind, so when the opportunity presented itself for Liana to work with her own iwi, she didn’t hesitate to take it up.

Liana brought her talents to her Taranaki iwi when seconded to be Claims Manager, and later General Manager, during negotiations with the Crown. “Some of the biggest challenges were that we went in knowing we would have to make a significant compromise in accepting any settlement offer, and also managing the expectations of our people in the process.”

The focus was to remember the fundamentals of who they are, honor where they come from, acknowledge the experiences and uphold the integrity of their tūpuna, or ancestors, in this transformative era of Treaty of Waitangi settlements.  “It became a healing process and we gathered strength as a collective through that common understanding.  At the end of the day that is what’s most important,” she says.

On September 5, 2015, the historic Deed of Settlement for Taranaki Iwi was signed. The Crown “issued a genuine apology that has enabled generations to heal, and at the same time help protect future generations from old wounds.”  Redress for Parihaka was not included in the settlement, but she has confidence that some resolution for Parihaka is close.

Being at home, Liana found she could add value and make incremental changes to empower her whanaunga (relations) through serving in governorships of various Taranaki Māori organizations including a Taranaki Māori language revitalization trust, a Taranaki Māori health provider company, the Taranaki-Whanganui Conservation Board, and Māori Land, hapū, and iwi trusts.  Giving back to a community that supported her to achieve all that she has is important to Liana.

For the last two years, Liana has chaired Te Kotahitanga o Te Atiawa – the post-settlement governance entity for Te Atiawa iwi. She is the only female iwi chair in Taranaki, one of only a few female iwi chairs throughout the country, as well as and one of the youngest.  Committed to engaging all hapū, she has been very active to gain bipartisan support in this set-up phase. Te Kotahitanga o Te Atiawa  are drafting plans for an organizational structure, and establishing subsidiary entities “doesn’t happen overnight” – it is an ongoing process, but Liana is in a good place.  When settlement for Te Atiawa is completed, she will be responsible for managing assets of approximately $100 million.  She says, “The biggest challenge going forward is ensuring that our iwi organization remains relevant to our people.”

True to the raukura (white albatross) feather immortalized by Parihaka as a symbol of peace and the future, Liana is positive about things to come. Living between the family home with partner Duane and one-year-old son, Rongomaiira, and sharing milking duties on Duane’s family dairy farm in the South, Liana is planning to expand her young family.  And in this reflective time, she is looking forward to Parihaka returning to a thriving, self-sustaining community in the near future.