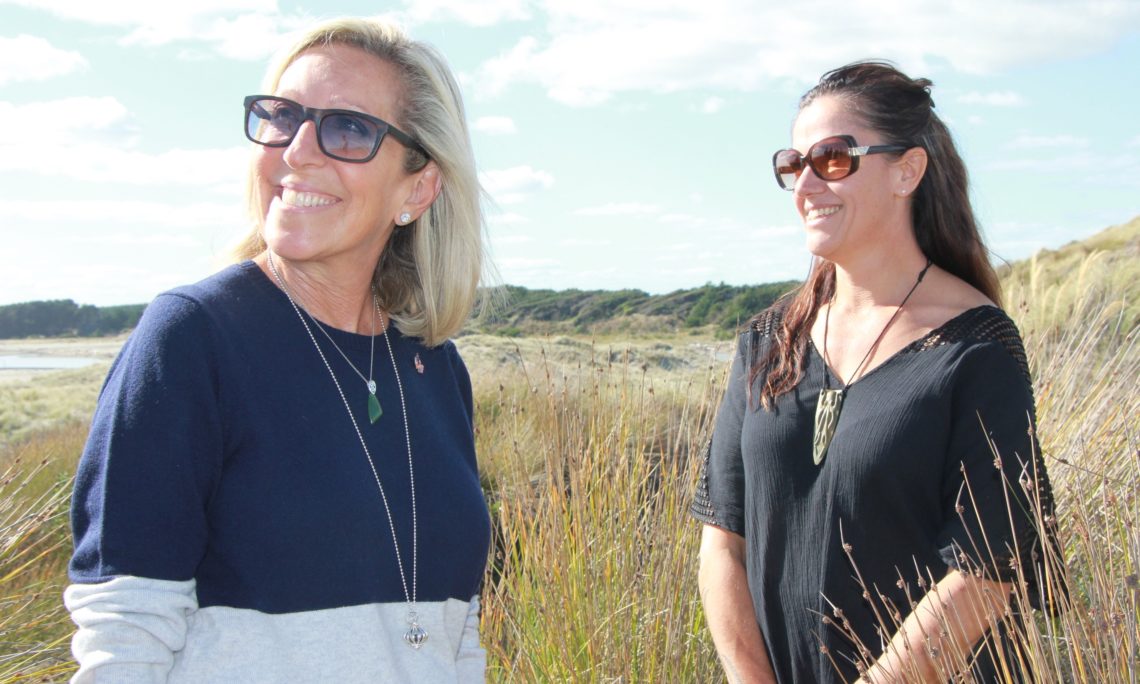 Libby Hakaraia is a trailblazing journalist, author and filmmaker, broadcasting New Zealand’s culture and cinematic stories to the world. A masterful auteur,  Libby pioneered New Zealand’s first international indigenous film festival – Māoriland Film Festival. I visited this gifted storyteller in her charming home town of Ōtaki, for the next installment of the Wahine Toa series.

Looking out to Ōtaki beach from her backyard sand dunes, Libby begins “I was known from the time I was very small as ‘that kid who asks questions all the time,” she smiles. Born to a former debutante Pākehā mother and Māori father, Libby joyfully described her early years as one of five children. “We became known as the Hakaraia tribe in Hamilton. Mum realized she married into a large Māori family and her strong sense of fairness enabled us to navigate both Pākehā and Māori worlds.”

Of Ngāti Raukawa ki te tonga, Te Atiawa, and Ngāti Toa Rangatira descent, Libby says “We spent every holiday and special event with my Dad’s family in Otaki. I was particularly intrigued by the tangi (funerals)process. It was a time for celebration and to pay tribute to those who have passed. Surrounded by hundreds of family and friends, we would observe tikanga Māori (Māori protocols), be introduced to new relations, play with our huge hoard of cousins and learn from kaumatua (elders). These positive experiences had a lasting effect on her career.

The inquisitive teen launched her broadcasting career shortly after finishing secondary schooling in Hamilton. She was soon discovered by a large Auckland radio station. Libby understood her unique position as the only Māori reporter in the Auckland newsroom. “I found that perpetuated Māori stereotypes were contrary to my loving upbringing and idealism,” she says.

At the age of 18, she had an ‘aha’ moment. “I realised there was little interest in knowing the Māori perspective. At news events Māori would often invite me to sit with them and really listen to their story. But more often than not my stories would end up literally in the sub editors bin. It was a turning point in my career and personal development.” She sought out new opportunities to hone her skills to balance competing principles for journalistic integrity.

At just 19 years old, Libby received a call that would induct her into broadcasting history. Renown Māori Broadcasters, Haare Williams and Henare te Ua called to offer a News Director role for New Zealand’s pilot Māori radio station. “The fear was huge, but I stuck to our family mantra – just do it. It was a six month pilot and for the first time I was exposed to the intricacies of Māori politics.”

Libby left for Australia shortly after for the Australian Broadcasting service in Sydney. “It was like walking onto the set of the Mary Tyler Moore show – all the old journos smoking at their desks and typing on old typewriters – not a computer in sight.”

Working abroad led her to meet one of the most significant figures in history. Covering government and politics in a Sydney newsroom, Libby interviewed Nelson Mandela on his first trip to Sydney after his release from prison. The career milestone is enshrined in a photograph proudly displayed in her home. She then bounced around a bit, including a stint working on yachts in the Caribbean, when she caught the ‘travel bug.’

Libby used journalism to travel all corners of the world, to gain new perspectives and insights into other cultures, and offer those to her audiences.

She joined her old boss Henarae Te Ua to create the bi-weekly Radio New Zealand show, WHENUA! (the land), and produced radio features on Tibet, Nepal, Cuba, U.S., and Antarctica to name a few. In addition, the role enabled her to visit marae throughout the country. “I went to places and met people from all walks of life I never could have encountered on my own. These connections were invaluable throughout my career.”

Libby’s work evolved into television, then short film.  She realized her radio stories could be converted into a visual medium, and enhanced using visual literacy techniques. She has since won several television and film awards for her work.

In 2014, Libby and her husband, Tainui, established the Māoriland Film Festival in Ōtaki. The goal is to show thought provoking indigenous films that move, hearten and unite their community. The initial seed was sown when Libby was working on a series about early Māori films with the then NZ Film Archive. “I saw remnants of a film shot in Ōtaki in the early 1920’s. At the end of the film the name of the production company appeared  with a logo and the following words; Ōtaki the home of Māoriland Films and the Los Angelos of New Zealand’s moving picture industry. I saw the two as a tohu (sign) to host our own film festival.”

Māoriland brings together indigenous films and their creators for five days of screenings, workshops and special events. These events include a 72hour film making challenge, youth film competition, and filmmaker speaker panels. In this short time, the festival has grown from 11 to 65 films. The festival unleashed economic opportunity for local businesses and its outer fringes.

And Libby isn’t resting on her laurels, “We have just bought the largest building in Ōtaki village to create The Māoriland Hub – an institute where people will come to learn about and create films. In the three short years since the birth of the Māoriland Film festival we have seen our small town become film literate and embrace filmmakers and visitors from around the world. Last year we had 7,500 people at Māoriland Film Festival and this year we have a hugely exciting film lineup as well as filmmakers and festival directors again coming from Canada, Sundance, Hawaii, Tahiti, Europe and Australia. With the Māoriland Hub we will be able to keep the film storytelling kaupapa running fulltime with workshops, film screenings and collaborations.” Not unlike the Sundance Institute which served as Libby’s inspiration for the Māoriland
Film festival.

Almost 100 years since the original Māoriland film company made movies in Ōtaki, our Wahine Toa Libby Hakaraia and her  whānau-based team are focused on making their town the Sundance of the South Pacific.