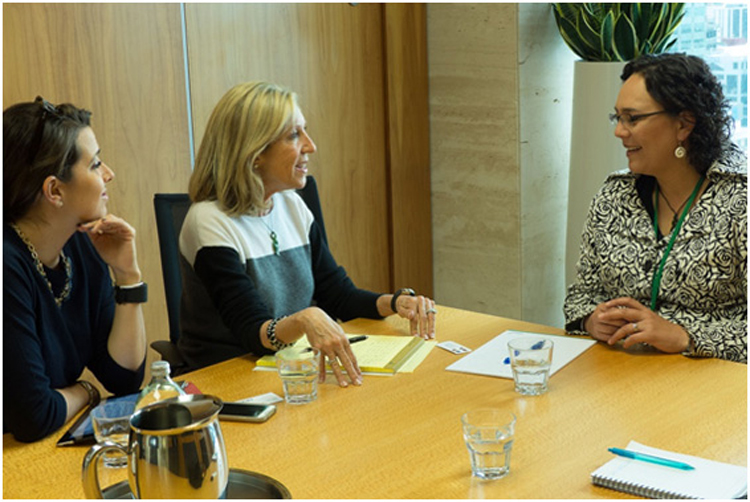 With my daughter Liz (left) on this special journey (Photo credit: U.S. Dept of State).

Last month I embarked on a long-term program called Wahine Toa (Women Leaders) to meet with, learn about, and highlight to our blog readers some extraordinary women Maori leadership and their significant contributions throughout the country. In the first blog of the series, I met trailblazer and educator Rangimarie Hunia from Ngati Whatua Orakei. The next woman I’d like to introduce is Lynell Huria, a very impressive lawyer from Wellington City.

I met Lynell sitting contemplatively in her law firm’s conference room, overlooking Wellington’s panoramic harbor. The soft-spoken attorney has dedicated her legal career to intellectual property (IP) rights and using those tools to protect the essence of Maori culture. Her work bridges tradition with the modern nuance of today’s legal system. She was the first Maori patent attorney, male or female, in New Zealand, and has just been named by New Zealand Lawyers Magazine as a top “Change Maker of the Year” in their 2015 Hot List.

Lynell was an academic standout who began university at age 16 and focused on financial math with the hope of becoming an actuary. Narrowly missing out on a job in the field, this “disheartening setback” set her on a new path. She started administrative work at her father’s law firm, A. J. Park, and it was here she fell in love with legal work. She returned to university, earned her law degree, and became a certified patent attorney.

At this time in the early 2000s, Lynell saw a need to embrace an IP ideology that she believes “is essential to the protection of Maori intellectual and cultural property,” and began examining the deeper implications of the WAI 262 claim. She started promoting the value of IP to Maori, but was initially met with resistance. In her experience, IP is seen as expensive and not inherently in alignment with Te Ao Maori (the Maori world) – te reo Maori (Maori language), tikanga Maori (protocols and customs), marae, and community. “The tools of intellectual property protection are contrary because ‘iwi’ is all about the collective, not the individual,” Lynell told me. She had to define an unprecedented model to bridge the two world views.

A documentary Poi E: A story behind our song is in the making and due to be released in 2015.

Her recent work includes helping her iwi, Ngati Ruanui and Patea Maori Club protect their 1984 hit single ‘Poi E’. Lynell beamed with pride as she retold how this cultural phenomenon was the first Maori language song to reach number one on the New Zealand music chart. Thanks to the foresight of tribal leadership, she developed an IP strategy and proactively registered a variety of trademarks, like the iwi name, to protect this cultural IP for future generations.

Working for her tribe has provided an important source of nourishment on her journey of self-discovery. She grew up in Porirua, where she was exposed to much of her Paheka (of European descent) father’s culture. Frequent visits to her mother’s iwiin South Taranaki gave her a taste of her Maori heritage, but she said, “Growing up I always felt something was missing.” She commented that her tribal work is so personally rewarding, as she reconnects with whanau, learns traditions, language, and much more.

Despite her busy career, her “purpose and greatest accomplishment” is her teenage son. Protecting the future is part of giving back: “The law is constantly changing in the IP sector, and getting people to see things differently is my life’s work.”

I left my meeting with Lynell inspired at how she had dedicated her time and expertise to ensuring that future generations will benefit from the richness of Maori culture. I am so grateful for the opportunity to experience this myself, and for the chance to meet women leaders like Lynell whose work is contributing so much to the fabric of New Zealand society.

I hope you continue to follow our Wahine Toa blog series as I meet with other Maori women leaders, and the Ambassador and I would love to hear from you about women that are making a difference in your lives and communities. I hope we can continue the conversation on Twitter and Facebook.