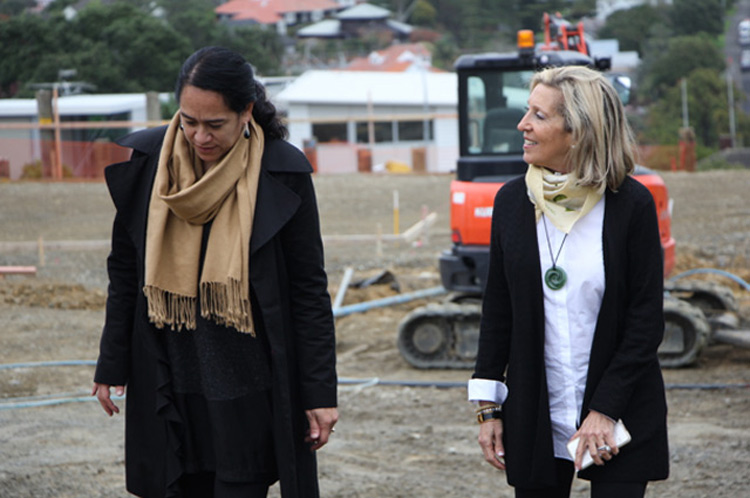 My family and I arrived in New Zealand with a commitment to make the most of each day — to learn, explore, and connect with the full spectrum of New Zealand society in this beautiful, culturally rich country. From my husband’s credentialing ceremony, I have witnessed so many incredible moments that showed the depth, importance, and splendour of Maori culture from its more than 120 tribes. Maori women, like women around the world, play an integral role in restoring and preserving culture, nurturing future generations, and promoting economic opportunity. After speaking with my husband, Ambassador Mark Gilbert, and the Embassy public affairs team, we put together a project to learn from, connect, and highlight the inspirational work done by Maori women making a difference in their communities. As former Secretary of State Hillary Rodham Clinton said, the key to a new and better future is unleashing and harnessing the economic potential of women around the world.

I have now embarked on a journey, a long-term program we call Wahine Toa (Women Leaders) to visit Maori women throughout the country who are giving back to their iwi (tribe) or community in varied and extraordinary ways. I invite you to join me on this exciting new venture as I feature women from different iwi each month in this blog series.

The first woman to feature in the Wahine Toa Project is life-long Orakei resident, Rangimarie Hunia, who hails from Ngati Whatua Orakei in Auckland’s Eastern suburb. Rangimarie has dedicated her life to improving basic social needs for her iwi. She has a long list of accomplishments, and there’s no end in sight. I caught up with Rangimarie for a wonderful conversation at a downtown Israeli eatery, fittingly called “Ima,” or mama.

Born on her tribal lands and raised by her grandparents and wider family, she grew up in New Zealand’s largest city, Auckland. She said, “As the city grew it presented challenges and a paradigm shift for my community to survive as an indigenous culture.” In the mid-1990s, while studying at university, it coincided with a national resurgence in preserving Maori culture. “I knew then and there that I’d dedicate my life work to my iwi”.

She met her husband while in university, started a family, and picked up a Master’s in Business Administration for her thesis Economic Renaissance of a Maori Community: Ngati Whatua o Orakei as a Case Study. Starting her career as the tribe’s first education advisor, she ran research projects, community programs, grants and scholarships, and created resources for tribal members anywhere in the world to celebrate and learn about their culture. Wanting their children to grow up with Te Reo Maori (Maori language) as a first language, Rangimarie and her husband, Tiaki, discovered a need for children’s books in the Maori language, so they wrote and published two popular books that are still in circulation.

Today Ngati Whatua Orakei is a well-established iwi in New Zealand. Between 1978 – 2008, the tribe “went from 300 cents to $300 million in thirty years”, as Rangimarie coined in her thesis. A combination of smart investments in the late 1970s and the Waitangi Tribunal redress, Ngati Whatua Orakei has grown their asset base to over $500 million. They manage tribal assets through their commercial enterprise, Whai Rawa, and redistribute the wealth to their members through their cultural organization, Whai Maia. The tribe supports their 3,000 members with events, grants and scholarships, and a variety of cultural revitalisation workshops. They host thousands of visitors and dignitaries at their cliff top Marae (communal facility); and welcome all Kiwis and visitors to celebrate major events such as the Waitangi Day festival.

She credited her mother and family for encouraging women into leadership roles. Rangimarie said women were always encouraged to be vocal and to lead. To pave the way for the next generation of leaders, she instituted a leadership training program run by experts, and then enrolled herself in it so she would learn too. Rangimarie sits on the trust board that governs the strategic direction of Whai Rawa and Whai Maia, and is a Director on Whai Rawa.

One of her proudest achievements is working with the board on an impressive $15 million real-estate project for first time homeowners called Kainga Tuatahi, which translates loosely to “Your first home but not your last.” The modern modular units are under construction on the gorgeous hilltop of Auckland’s famed tribe. With sweeping views of both the central business district and famous Sky Tower, and facing the stunning Mt. Eden volcano, this complex of thirty new homes is no small feat. She worked to ensure the newly built houses adopt a high housing standard, including effective insulation to help prevent diseases like rheumatic fever in children. And, the houses will run efficiently on solar power.

Hunia spoke passionately about the confidence boost and self-esteem created when someone owns their own home, and how Ngati Whatua’s investment in this project reflects an investment in their members’ future. She shared some of the challenges along the way – such as a changing real-estate market, which produced dramatic increases in real estate costs. Caught in banking nuance and changing mortgage scenarios, Rangimarie and her tribe worked to lower deposit prices and extend mortgage terms so those first time homeowners could still qualify despite the rise in cost. As a result, one hundred people will move into gorgeous new homes! A lottery in June provided the qualified applicants with their new homes and Rangimarie, who is involved in all construction details, was bursting with emotion as she described the evening of the lottery, the tears of joy shed and the depth of gratitude of the new homeowners.

A trailblazer, educator, leader and mother of four, Rangimarie Hunia is a positive force of nature.

I would love to hear from you about Maori women that are making a difference in your communities, and please stay tuned as I continue my journey meeting extraordinary Maori women leaders.