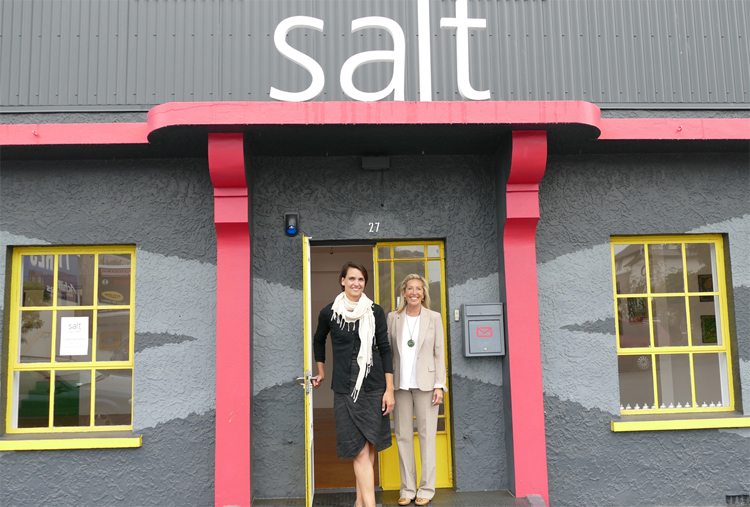 The Ngāti Rārua iwi in the upper South Island is known for its strong female leadership, beginning with the women that the iwi was named after Raruaioio and Raruatere.  Generations later their legacy holds true as they introduce a current female leader, Olivia Hall. I visited Olivia and her art students at Salt Art Gallery in Nelson.  Olivia combines her passion and talents in the Arts and Business into a number of successful endeavors that reflect a “modern Māori image to promote a modern Māori voice.”

Olivia’s story began working her parents’ apricot and cherry orchard in Central Otago. She credits her parents for her strong work ethic and business acumen, and her mother, Gail, an accomplished florist, for her creativity. In high school she was drawn to a poster enlisting for Toihoukura – School of Māori Art and Design in Gisborne. The art school was leading the way in Renaissance Māori Art and “growing up in a 90% Pakeha community, the poster symbolized a way for me to explore my Māori culture and heritage in a visual and creative way.”

A determined 17-year-old, she exited her seventh form (senior high school) year early and bought a one-way ticket to Gisborne. At 18 years old, she and her childhood sweetheart (and later-to-become-husband), Dion, had their first son. The young family moved to Burnham Military Camp near Christchurch where she completed a Bachelor of Arts Māori, from the University of Canterbury, and then a Graduate Diploma of Teaching and Learning. “Nowadays, I try to be a role model for young mothers who have not followed a straight forward path in life, that they can still achieve anything they set their mind to”, she says.

Olivia’s long-held desire to pay it forward to her community began with her first role in the iwi space. She answered a job advertised with Ngāti Rarua Ātiawa Iwi Trust (NRAIT), managing its social and cultural arm in Nelson. She raised funds to widen the sphere of iwi initiatives including quarterly rangatahi wānanga (traditional learning opportunities for youth), and published Toi Whenua – a resource rich in history, karakia (prayers), waiata (songs) and photographs of sights of significance.

For a time, her work and personal life drew parallels between success and challenges. Olivia was Senior Concept Developer for the largest refresh project of Te Papa Museum’s Māori exhibition spaces, which overlapped with her study for a Masters of Business Administration at Massey University, and pregnancy.  At that point, “the wheels started to fall off” she says.

At the birth of her fourth son, Olivia made a conscientious decision to put aside her career and focus on her family, and finish her Master’s degree.  She has since moved between the worlds of Art, Business and Governance with natural ease. In 2010 she entered the famous World of Wearable Arts competition and won first prize in the South Pacific section. She drew inspiration and strength from her tupuna (ancestors), Raruaioio and Raruatere, and created a powerful image titled ‘Mana Uha’ – meaning the essence and prestige of women. The contemporary Māori dress that she created has since been shown all over the world including representing New Zealand’s team at a showcase for the Louis Vuitton America’s Cup in San Francisco.

Her devotion to creating opportunities for her community is matched by her hard work ethic. She has served in a variety of governance roles that she still holds today including Chair – the Tasman Bays Heritage Trust and Te Rūnanga o Ngāti Rārua, as well as Trustee of Nelson Bays Primary Health Organization, among others. Olivia is leading Te Rūnanga o Ngāti Rārua into a new phase of their history, since completing their Treaty of Waitangi settlement process in 2015. The post-governance entity has developed a long-term strategy the three pou (pillars) that quintessentially captures the intricate Māori value system: Mauri Ora (cultural) to focus on Ngāti Rārua identity; Ohaoha (economic) to grow the economic base; and Hononga (people) to strengthen relationships and capacity-build iwi members.

Working for a time in marketing, self-starter Olivia recognized the need for a Māori event management company and, along with a friend, launched Meke Events. “Not only able to deliver high standard events, I wanted to be able to create events that retain the essence of Māori culture beyond flax flowers on a plate.” One of her first signature events was the inaugural Meke Māori Excellence Awards – celebrating Māori individuals and businesses in a variety of sectors. It was a big success; Olivia had tapped a vibrant chord in the local community, which was excited to showcase and celebrate Māori achievement in Te Tau Ihu.

Her business prospering, Olivia was invited to serve as a tutor at the Nelson Marlborough Institute of Technology, from 2014-2015, leading the Kawai Raupapa Rauangi – Māori Visual Arts course. “Nelson is nurturing a new generation of Māori artists to give them confidence and to teach them how to think like an artist. I feel humbled to be in a position to assist them to follow their dream” she says, with the young artists having already exhibited their work in a number of local galleries.

Obviously a multi-tasker, Olivia juggles her governance, business and art roles while being a devoted wife, mother and grandmother.

Olivia has an endearing and enduring commitment to her iwi where she is a champion for young mothers to break the glass ceiling.

The Wahine Toa series so far.