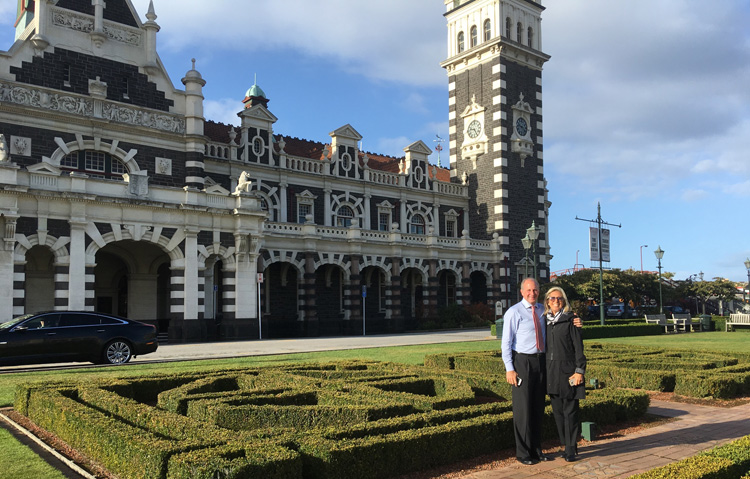 The Gilberts have arrived in Dunedin. Photo credit: U.S. Department of State.

On April 13 and 14, 2016 the U.S. Ambassador Mark Gilbert and his wife, Mrs. Nancy Gilbert, made their first official visit to Dunedin, New Zealand. The Gilberts met with a cross section of Dunedin’s government, business, university, and civil society sectors. It was a fun-filled trip to learn more about existing U.S. and New Zealand connections and to build relationships for the future.

The Ambassador met with Mayor David Cull, local Members of Parliament, and Dunedin City Council members to learn about Dunedin’s history and future plans for the city.

The Ambassador discovered the many U.S. connections at the University of Otago. A significant connection being that the Vice-Chancellor, Harlene Hayne, is American and also sits on the Fulbright Board. The Ambassador and Mrs. Gilbert met with many university student and staff groups.

The Ambassador, Mrs. Gilbert and Craig Halbmaier, the Embassy’s Engineering, Science, Technology and Health Officer, kicked off the first event for the Dunedin section of the 2016 U.S.-New Zealand Youth Council. They discussed the U.S. Presidential Election and its implications for New Zealand.

The U.S. Embassy staff met with American exchange students studying at the University of Otago for the 2016 first semester. American students chose to study at Otago for a variety of reasons including to take part in the excellent exercise sport science program, to see the Lord of the Rings film locations, and because of existing memoranda of understandings with their U.S. home universities. Students compared some of the similarities and differences between the U.S. and New Zealand, including the political system, media, commerce, and science investment.

The Ambassador gave a speech on “TPP and the U.S.-New Zealand commercial relationship” to about 100 students and staff from throughout the university. His speech was a part of the Otago Business School’s Visiting Executives Program, which brings leading national and international executives together to give presentations on topical commercial subjects. The Ambassador addressed the process of ratifying TPP, the effect of the U.S. Elections on TPP, and how TPP addresses climate change.

The Ambassador met with Dunedin businesses, many of which have visibility on the world stage and branches in the U.S. market. For example, Animation Research has been contracted to build a 3D virtual model of New York’s waterways for America’s Cup television coverage. Classic Jaguar Limousines, which provides tours to Larnach Castle and the penguin colonies, has been featured previously in the New York Times. The Ambassador discussed future pathways in to the United States for Dunedin businesses.

U.S. Embassy staff toured the Otago Museum. The Museum has worked closely with NASA to develop its Planetarium and science programs for kids. Behind the scenes, U.S. Embassy staff learned the science and art behind how artifacts were curated and preserved. The Ambassador and Mrs. Gilbert also got to participate in the daily release of the butterflies that the Museum carriers out as a part of a science education experience.